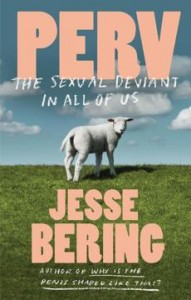 Jesse Bering, Ph.D., holds an extensive and impressive background in the field of psychology. Recently, however, he’s departed a bit from his own niche, and worked his way into that of sexology. His most recent book, “Perv: The Sexual Deviant in All of Us,” poses questions about sexuality many of us have likely considered or encountered, but have perhaps been too afraid to sincerely ask.

Dr. Bering talked to us about “Perv,” and about the long and complicated process of uncovering some dirty secrets surrounding human sexuality.

What was step one to writing this book? Certain chapters published in journals?
Actually, my route toward this particular book, “Perv,” was very different from the one most academics would take toward writing a popular science book. Usually, when a professor decides to write a popular science book, they’re summarizing their own research in a jargon-free way that makes it accessible to general readers. And of course that’s completely understandable; when you’re a scientist who’s passionate about your lifework, it can become quite frustrating knowing that only a handful of people in the world—other specialists like you, basically—are aware of it, let alone appreciate it. But I’m not a sex researcher. I have a Ph.D. in psychology, and spent about a decade as a professor in various universities, but my academic work was in the field of religion. I began writing about sex when I essentially burnt out of studying religion—my first book, “The Belief Instinct,” helped me put a period at the end of that chapter of my life. Sex, like God, was just another big topic with all sorts of twists and turns that fascinated me. So, after leaving my academic job in 2011 and transitioning to a full-time writing career, “Perv” was simply the book I first turned my attention to, sinking my teeth into deviance.

What was your process of deciding which paraphilia to write about?
I don’t want to give the impression that “Perv” is simply an encyclopedic round-up of weird kinks and fetishes, because it’s much more than that. But in the chapter on paraphilias (literally, “love outside the norm”), there are certainly some carnivalesque ones in there, including “lithophilia” (arousal by gravel), “melissaphilia” (attraction to stinging insects), “savantophilia” (lusting after the mentally impaired), and so on. I suppose my only conscious strategy in deciding which to include—and I was faced with an embarrassment of riches, with a staggering 547 identified paraphilias—was to keep the attention of the reader while also maintaining my own intellectual rigor. I’m trained as a scientist, after all, not as a journalist, so I view my job as primarily educating readers about complex or difficult topics that they’re unlikely to wade into otherwise. But in my book, at least, a science education should come with some decent entertainment value.

You’ve mentioned studies before that you found “a little too uncomfortable.” Uncomfortable for whom?
Well, everyone, really. No matter how open-minded and mature you may think you are about sexuality, you’ll find something in the book—trust me on this—that makes you squirm. Me included, certainly. When I came across a case study about, say, a middle-aged accountant who could only masturbate to orgasm by fantasizing about cutting off his own penis (just consider what a major cognitive hurdle that is, to obtain an erection by the image of that very organ detached and limp), I admit it was hard not to sit up straight and cross my legs. There was a whole Freudian castration complex going on with that one, or so the psychoanalysts working on the case thought. But not a pleasant little tale, in any event—and I haven’t even told you how it ended. Spoilers aren’t any fun.

You mentioned on Conan that the point of the book was inspired by there not being enough hard data surrounding your subjects due to “social inappropriateness.” However, we now have a range of researchers to look into, from the Kinsey Reports to historical dramas like the recent “Masters of Sex.” Where do you fit in with this progression toward the revelation of sexual behavior?
The best sexologists have been plugging away at this part of human nature for decades, unperturbed by concerns over political correctness or any fleeting conservative cultural zeitgeist. But what I was referring to with that comment, in particular, was the fact that so much of the field—including the pioneering work of Alfred Kinsey, and plenty of research even today—is comprised of self-reports. Data derived from questionnaires, surveys, interviews and so on can be enormously helpful, but it has an intrinsic limitation in this area, since even when subjects are told explicitly that their responses are anonymous and confidential, there’s a reluctance to share everything—or anything, for that matter. For years, I was so closeted as a gay man that I’d have checked off the heterosexual box, no matter how much the researchers assured me of these things. They’re certainly more invasive, but physiological measures of sexual arousal are also more revealing of our hidden sexual natures. What I emphasize in “Perv” and what I hope, ultimately, is one of its lasting messages: that no matter how we portray ourselves to other people (or even to ourselves) in terms of our “sexual identity,” each of us still has a sexual reality that operates independent of that superficial presentation to the world. I think we’d have a far more humane society if more people could align those two levels.

As you were doing your research, which paraphilia that you uncovered were the most genuinely surprising to you?
Well, I’ve already mentioned a few of the more exotic ones. Frankly, they’re so bizarre that “surprising” would be a criminal understatement. But the ones that defy theoretical interpretation in terms of how human beings evolved to respond to features in the environment signaling disease or contamination are certainly challenging to wrap one’s head around. Some people are “teratophiles,” for instance, which means that they’re attracted to the congenitally deformed, which certainly isn’t a terribly adaptive form of mate selection from the genetic point of view. And then there are paraphilias involving lusting after things in the environment that tend to make the rest of us nauseated, such as erotic vomiting (“emetophilia”) and coprophilia, for instance. There’s even a bustling community of people who desire used and publicly discarded condoms. Yes, there’s the “gross and disgusting” reaction to these stories, which I experience like anyone else. But that’s not the most interesting part of it to me. What’s more fascinating is that, in some people, lust can override even our most basic evolved adaptations for disease avoidance.

“The problem with zipping up on our dirtiest little secrets…” you wrote, “is that others are doing exactly the same thing.” What kind of communication, exactly, did you hope to open up by writing this book?
Honest communication, essentially. I wanted to encourage people to self-reflect on their own private history of sexual desire and arousal by providing them with an enlightened, modern scientific view. Once we acknowledge that none of us can be easily squeezed into the “normal” box, this begins to change our perspective of the concept of normality itself, and forces us to consider just why we’re so preoccupied with such a morally meaningless concept to start with. A scientific education can defuse the cultural and political rhetoric that’s barred us from having such frank conversations until now. Science itself is amoral—which is to say, it doesn’t tell us what’s “right” and “wrong.” But in my opinion, moral progress occurs via the acquisition of scientific knowledge. For far too long, we’ve allowed incurious, scientifically illiterate, and, honestly, not terribly bright people such as politicians and pastors to persuade us about sexual morality.

And, finally, you’ve mentioned religion in here. What might the current pope think of “Perv?”
He’d agree with all of it. But he could never say so, and that’s Hell.

“Perv: The Sexual Deviant in All of Us”
By Jesse Bering
Scientific American / Farrar, Straus and Giroux, 288 pages, $26