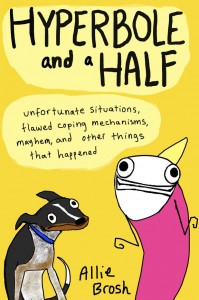 Allie Brosh doesn’t post on her web comic Hyperbole and a Half regularly, so when she does it sends quivers through the Internet community. The format of her work is text, maybe a paragraph or two, followed by an illustration of utmost simplicity. Her neckless figures approximate the general form of a torso, with stick arms and legs that nevertheless entirely capture the depth and breadth of the human condition. Her stories are confessional, biographical, and hysterically funny. To this day, her story about moving across the country with two anxious dogs remains one of the funniest things I’ve ever read. Stories we love from online are preserved in the book for those of us who prefer our media on paper, as well as new chapters not available online.

More recently Brosh has written candidly about a debilitating depression she’s suffered and the various ups and downs she’s experienced trying to overcome it. She presents this information bravely and beautifully, with more than a little humor included. Just the sight of her character’s trademark pink shift and little triangle of yellow hair covered in a stained grey hoodie let’s you know Brosh herself has spied the humor in the situation. Which doesn’t mean that her comics have reached some serious, next-level territory. “…there’s no tactful or comfortable way to inform other people that you might be suicidal. And there’s definitely no way to ask for help casually.” There follows a knock-knock script with lines like “I want to be dead/actually this isn’t a knock-knock joke…” crossed out. What’s beautiful about her online community, and what a quick perusal of her fan’s comments on her blog will confirm, is that she really speaks to her audience and they identify with her and thank her. Her depiction of depression, which can be embarrassing, numbing, silly and awful, is relatable, but in the way most of us wouldn’t dare admit. “And that’s the most frustrating thing about depression,” she writes. “It isn’t always something you can fight back against with hope. It isn’t even something—it’s nothing. And you can’t combat nothing. You can’t fill it up. You can’t cover it. It’s just there, pulling the meaning out of everything. That being the case, all the hopeful, proactive solutions start to sound completely insane in contrast to the scope of the problem.”

Another thing that’s great about Brosh’s drawings is that the child Allie is essentially the same as grown-up Allie, and sometimes it might take a while to discern which one is the subject. In a chapter titled “The God of Cake” the child Allie’s frustration over an unattainable cake mirrors the same frustration we see in other chapters where the adult Allie can’t manage her dog’s behavior. This childlike behavior in adult life is a strong theme in the book—Brosh is searching for that middle-ground between her ideal conception of herself (who would carry multiple people out of danger on her back) and her actual impulses (she would like to push people in the sand. Hey, doesn’t everyone?).

When you have your own online meme and web-traffic into the millions per month, publishing a book on paper seems downright quaint. But despite or because of her huge internet success and adoration, “Hyperbole and a Half” in book form is comforting, charming and insightful. (Kelly Roark)