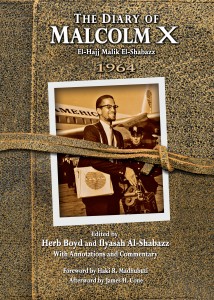 By Jeff Gilliland
Another wrinkle has emerged in the twisted tale of “The Diary of Malcolm X.” Shortly after our November 14 cover article—“Necessary Means: ‘The Diary of Malcolm X’ and the Fight for an American Legacy”—went to print, attorneys for some of Malcolm’s heirs brought a copyright infringement lawsuit against the book’s publisher, Third World Press. Filed in the District Court for the Southern District of New York, the complaint accuses Chicago-based Third World Press of entering into an unlawful agreement with the editors of the “Diary,” and repeatedly ignoring requests to cease from publishing the text. On November 8, presiding judge Laura Taylor Swain issued a temporary restraining order on the release of the “Diary,” which has been extended until preliminary arguments can be heard in January, 2014. The plaintiff in the lawsuit is X Legacy, LLC, a legal entity created by five of the six Shabazz sisters in 2011 “to protect, consolidate, and enhance the value of the assets and properties relating to the beneficiaries of…Malcolm X.” According to the text of the suit, the sisters formed the limited liability corporation to prevent any member of Malcolm’s family from unilaterally licensing or exploiting his assets without permission from the rest of the heirs. When third sister Ilyasah Al-Shabazz entered into a publishing contract with Third World Press, the suit alleges, she did so without X Legacy’s consent and without “any ownership rights or authority…to copy, publish, or disseminate the Diaries.” Third World Press, for its part, maintains that it entered into the contract in good faith and believed that Ilyasah Al-Shabazz was acting on behalf of all of X Legacy. “We signed a legal contract,” company vice president Bennett Johnson told New York’s Amsterdam News. “We were quite surprised when Mr. McMillan [X Legacy’s attorney] turned up with his legal brief.” Further, the Press is questioning the timing of the suit, claiming that though they signed the contract in March, they did not hear from X Legacy’s attorneys until “we had already had the book printed; we were already in the process.” 10,000 copies of “The Diary of Malcolm X” now lie fallow in a distribution warehouse, and may never make it to bookstore shelves: X Legacy has made it clear that it intends to publish its own edition of Malcolm’s diaries in 2015, and has already preregistered that version with the U.S. Copyright Office. Complicating and intensifying the entire legal process are the personal relationships underlying it all. The Shabazz sisters have been at odds over ownership of their father’s unpublished papers for years: in 2002, youngest sister Malikah took them without permission and placed them in a storage unit in Florida. When she stopped paying the bill on the storage unit, the family had to buy the papers back from a San Francisco auction house for $300,000. On the flip side, Third World Press and its founder Dr. Haki Madhubuti have long been friends of the Shabazz family: Madhubuti spoke at Dr. Betty Shabazz’s funeral in 1997, and claimed in an interview with Newcity that the agreement to publish the “Diary” was “a result of [the family’s] commitment to Third World Press.” That commitment is now under impassioned dispute, motivated not only by the family’s history but by the diaries’ status as a potential moneymaker. X Legacy’s lawsuit makes it clear that they see the diaries as “highly valuable intellectual property,” and demands that Third World Press pay “substantial damages” for infringing the copyright. As noted in the earlier Newcity article, however, Third World Press poured nearly all of its capital into publishing the “Diary” and had to hold an Indiegogo campaign to raise money for marketing and production. If found to be infringing upon X Legacy’s copyright, Third World Press would have to turn over all the money it made through the campaign, in addition to paying damages and legal fees. Despite the “very negative impacts” the lawsuit is already having on Third World Press’ revenue stream, the publisher remains adamant that it is not about commercial success. “More than the money, it’s the legacy of Malcolm,” Bennett Johnson tells Newcity. “He would probably be embarrassed by this whole situation.”