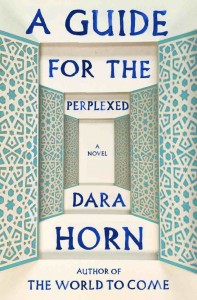 Dara Horn has a particular gift for mixing contemporary stories with ancient ones, threading them together with resonant themes. The story of Job, for example, is a common theme in her books. Job, a decent person, suffers a great many disasters, yet never blames God or questions his faith. Why bad things happen to good people or, better yet, how people play the hand they’re dealt, however poor, is a recurring question in her novels. “A Guide for the Perplexed” sounds like it might be useful to someone like Job, and Horn’s title is based on a book called “The Guide for the Perplexed,” by Maimonides. Indeed, the Rabbi’s twelfth-century book is a work that explores the relationship between religion and philosophy. Given Horn’s propensity to delve deep into the past, the book opens somewhat surprisingly in the not-so-distant future. Josie Ashkenazi has invented a program called Genizah that logs basically every detail of your life for easy searching. The Genizah is explained early when Josie’s daughter loses her shoe—Josie simply types in her daughter’s name as well as “shoe” and is instantly shown a picture of the shoe dropping to the floor of the car. The software pulls information using mobile and home devices, and nearly everyone in the world uses it. It’s less widely used, however, in Egypt, where Josie’s jealous sister, Judith, encourages her to go and work on a special project at the library.

Parallel to Josie’s story is that of Solomon Schechter, a Jewish scholar of the late nineteenth century, and two twin sisters. Schechter and the twins are historical figures that come to brilliant, amusing, delicate life in “A Guide for the Perplexed.” On the hunt for knowledge, eager to read and happy to learn a new language in order to explore a new idea, these three form a counterpoint to Josie’s Genizah, which catalogues a vast amount of information without any difficulty at all. Schechter’s pursuits are riddled with difficulty, not least of which is money to purchase texts and access to information. Patiently waiting for the twins to serve tea before he can launch into the specifics of a certain codex nearly drives him to distraction. “Every synagogue has a storeroom in it called a genizah—a hiding place,” Schechter says. “A place for keeping damaged books and papers that contain the name of God.” Eventually Schechter discovers such a place. “The air in the room was alive, trembling with the thoughts of the thousands of people whose names were inscribed in the parchments below. He sifted the papers before him, lifting them like sand and letting them slide between his fingers.” Just like Josie’s Genizah, his dusty room with crumbling papers has the possibility of bringing its writers to life.

Of course preservation of memory is not as easy as writing words or events or transactions or contracts on a page, or even recording a video in high definition. One of the things that Josie misses most is the weight of her husband’s hand in hers, a detail uncaptured by her devices. The nineteenth-century twins point out that their mother, who died when they were babies, was cobbled together based only on a handful of words in a letter. They desire no more knowledge of her, they had created the perfect mother, and more information might ruin her.

Horn explores sibling rivalry, memory, free will, the paradox of hope assuming God is all powerful, and quantum physics, no less. “A Guide for the Perplexed” is a return to form for this challenging, marvelous writer. Her intellectualism and religious exploration create a thought-provoking read that won’t soon be forgotten. (Kelly Roark)