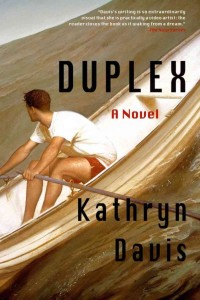 Maybe I just didn’t get it. “Duplex,” the newest novel from author and writing professor Kathryn Davis, is certainly a rich and complex narrative that appears to try to parse out the complexities of growing up and experiencing life in as fantastical and surreal a world as possible. How much it succeeds in those goals may be up to the reader. The novel is in its own way captivating, but for the same reasons it entrances, it also alienates.

“Duplex,” I think, is about a young girl named Mary who falls into teenage love with her high-school boyfriend Eddie, who may or may not have died on the street where they both live in the book’s very first moments. Her town’s resident sorcerer  (and possibly classmate) is captivated by her and decides she will bear his future offspring, which, I think, is a Teddy bear brought to life by his seed. (“I think” was a recurring theme for me as I read this book.) The reader is dropped into the fantastical, possibly futuristic world of “Duplex” from the first word, given no context or history, not even provided a reliable narrator. Chapters switch perspectives, stories, and time of delivery, and some of them are stories told by an older girl named Janice to her mostly unnamed younger friends. In this world some neighbors are robots, there is a maybe-protagonist who is possibly also a rabbit (or king of the rabbits) named Downie, a daughter (not daughter?) named Blue-Eyes, and references to ominously named but never-explained past events like The Rain of Beads, The Great Divide and The Aquanauts. The entire town is lost in something called Space Drift. Some of these stories are sort of told; others (The Rain of Beads in particular) are often referenced but left unexplained. Some are the titles of chapters, but do not seem to lend context.

The entrance into this world is so abrupt, and the world itself so under-explained, that I found it difficult to get into “Duplex.” It took real effort to push through the first chapters, though that effort did pay off. A slim novel, when “Duplex” finally succeeds in sucking you into its universe it creates a hazy, dream-like world that is surprising and intriguing. Davis’ prose is beyond reproach; it is menacing, whimsical, wistful and evocative at every turn. It’s just that what’s happening is so difficult to parse. Obvious themes are woven through the text, themes about growing up and motherhood and small communities and fame and sacrifice and the relationships between girls and women, but because I could never get a full grasp on what was going on, they sort of floated above my head, as lost in Space Drift as the town they’re in.

This, ultimately, is where “Duplex” fails. Davis’ novel is less story than hallucination, less narrative than dream. At one point relatively early on she meditates briefly on “contact dreams”—dreams that seep through the walls of the street’s duplexes and fill minds with strange visions at night. At its best, “Duplex” feels like a contact dream, unmoored and strange and oddly hypnotic. The rest of the time, it lacks the narrative gravity to keep the reader grounded in the story and with the characters. In the end, like the hazy ends of dreams, it all just drifts away. (Sara Tenenbaum)