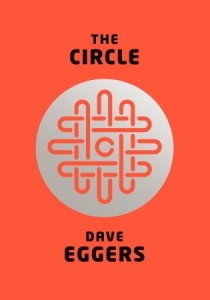 In Dave Eggers’ “The Circle,” Mae Holland gets a job working for a powerful company. The company, called the “Circle,” is a bit of a mash-up between Google and Facebook—it’s run by young, creative, enthusiastic people, and Mae feels lucky to have gotten a job there. Her relatively lowly position as a customer-service rep is touted as a common and useful way to move quickly through the ranks, and she is given additional responsibilities almost immediately. She’s encouraged to shop at the company store and try out new samples from the bonus room as long as she gives them smiles or frowns in her public online spaces. Like many young people entering the job market, she thinks it’s great that there are beds, showers and three meals a day available on campus. The inclusive health plan includes a permanent bracelet that sends her vital statistics to her Circle doctor constantly. What could be wrong with that? There’s a history of illness in her family. Mae agreeably assigns more and more of her life to the Circle after gentle reminders of the benefits she’ll reap, and of the aid she can provide to so many, just for providing her honest thoughts and feedback about products she encounters. Although clearly satirical, every bizarre invention Eggers comes up with seemed to be reflected in the daily news. Mae eventually goes “transparent” and her every move is streamed online. Viewers not only follow her pedometer results obsessively, but one person takes it upon himself to track her sodium and contact her doctor about a potentially dangerous outcome. Subsequently her doctor tells her to cut out all salami from her diet. When our very right to processed meats is threatened, it becomes all too real. The New York Times October special edition “Digital Doctor” indicates that “early-warning systems” are in the testing stages.

Mae has millions of viewers after she goes transparent, and she’s the perfect shill for the Circle—a true believer and devotee, she’s proud to be a part of the company and excited about the impact she thinks she’s having. “I want to thank all the watchers who sent frowns to the government there,” she says of China, “both for their persecution of this artist, and for their restrictions on internet freedoms. We’ve sent over 180 million frowns from the U.S. alone, and you can bet that has an effect on the regime.” She feels good about what a lot of us do—internet slacktivism, but for all the petition signings it doesn’t seem to have made a big impact on the world yet. There are only a few dissenting voices in Mae’s world—an ex-boyfriend tells her, “For years there was this happy time when those controlling the major internet conduits were actually decent enough people. Or at least they weren’t predatory and vengeful. But I always worried, what if someone was willing to use this power to punish those who challenged them?”

Eggers seems to have been quietly creating his own genre. His fiction gently introduces the reader to a topic or injustice—the lost boys of Sudan, immigration issues, Patriot Act malfeasance, corporate greed or corruption—educates the reader in the course of a compelling story, and the reader walks away feeling like a smarter, better person. “The Circle” might not let the reader off so easily, assuming an implication in the reader’s actions. While the average reader of Eggers’ work might not have directly contributed to the plight of Sudanese refugees or violated the rights of an American citizen in New Orleans, the average reader is quite likely to have a smart phone and Google and Facebook accounts. Eggers forces the reader to consider more thoughtfully the implications of loss of privacy, even if it is, ostensibly, for greater safety or better health. The critical reader might as well take the opportunity to question the motivations of the book. “The Circle” seems posed to promote greater thought amongst Millennials to question their choices to let go of their privacy. I suppose in certain circles “The Circle” could be seen as radical liberalism but it reads like a reasoned hypothesis. It’s certainly a fine addition to some of the better dystopian novels of our time—”Super Sad True Love Story,” Cory Doctorow’s “Little Brother” or the great “Feed” by M.T. Anderson. Like these other topical novels, “The Circle” is likely to find an important place in the history of literature. (Kelly Roark)