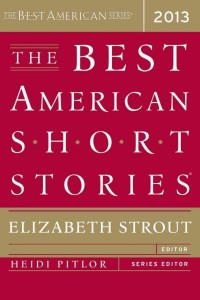 Once a year, the Best American series descends from the heavens holding in its pages what its editors, and guest editors, have determined are the best writing in sports, nonfiction and short fiction from the previous year, among others. This year, the series drafted “Olive Kitteridge” author Elizabeth Strout to edit the “The Best American Short Stories: 2013,” a strong pedigree to be sure. But did Strout and series editor Heidi Pitlor choose wisely?

The answer is largely dependent on what you think the purpose of a year-end anthology is.  If you’re someone who thinks that anthologies should focus on finding and promoting new voices, “The Best American Short Stories” probably isn’t for you. The anthology features many of the usual suspects. Of the twenty-two stories in the collection, three stories are from Granta, six are from the New Yorker, and the vast majority of their authors have been published in one publication if not both. Strout, when discussing her choices in the introduction, praised the distinct voices of three authors most will recognize immediately: Junot Díaz, George Saunders and Alice Munro. But it’s not as if these are the wrong choices. “Train,” Munro’s contribution, displays the chops that won her a Nobel Prize; Saunders, a writer renowned for baking unique voices into each one of his stories, lends the anthology what is probably his greatest novella, “The Semplica-Girl Diaries.” And while perhaps Díaz relies a little too much on his perennial narrator Yunior, he does so with good reason: Yunior is one of the strongest voices in contemporary fiction, and more importantly, one unique to Díaz.

Just because the anthology features many old hands doesn’t mean you won’t see anything new. Daniel Alarcón opens the anthology strong with “The Provincials,” a short story that dips its toes in the waters of a stage script, with thematically resonant results. Steven Millhauser, in “A Voice in the Night,” takes the story of Samuel’s calling from the Bible and juxtaposes it with both that of a young Jewish boy flirting with faith and the old atheist author that boy became, all three magnificently using the four-part structure of the original. There are strong thematic connections between stories too;  Karl Taro Greenfeld’s “Horned Men” and Gish Jen’s “the Third Dumpster” both tackle the causes and costs of the Great Recession directly, while the double punch of “The Semplica-Girl Diaries” and “The World to Come” use science fiction and history respectively to explore those same anxieties  indirectly.

Living up to its name: “The Best American Short Stories 2013” features no duds, even if a couple of the stories aren’t quite as good as the rest. Charles Baxter’s “Bravery” is easily the weakest story in the collection, uneven and with a clumsy ending, but still manages to be a fascinating exploration of the ways gender roles change and persist. “Malaria” also feels clumsy, but intentionally so, a story that is as much about how stories are told by their narrators as it is about what actually happens.

But other than that, are these stories “The Best American Short Stories?” The short answer is yes. Strout and Pitlor may have assembled a grouping of veterans, but it’s a diverse group and an innovative one to boot. It’s an anthology that’s a bit redundant if you subscribe to all the major venues for short fiction, but that isn’t a bad thing. (Brendan Tynan Buck)