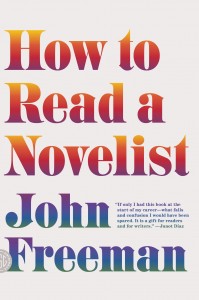 John Freeman’s “How to Read a Novelist” contains fifty-six illuminating profiles of some of the most-acclaimed writers of our time, including Toni Morrison, Jonathan Safran Foer, Joyce Carol Oates and A.S. Byatt. Each of these profiles contains both wisdom and idiosyncrasy, certainly sides of some writers that we don’t see in their books. In a conversation with John Freeman, the former editor of Granta and sometimes Newcity contributor, we get a little bit of his idiosyncrasy.

The first thing I’m interested in here is the issue of intimacy. “It was a breach of everyone’s privacy when a reader turns to a writer,” you write, “or a writer’s books, for vicariously learned solutions to his own life problems. This is the fallacy behind every interview or biographical sketch, to tether a writer’s life too literally to his work, or to insist that a novel function as a substitute for actually living through the mistakes a person must live through in order to learn how to properly, maybe even happily, survive.” However, I’d argue that this is part and parcel of the act of reading: we hope that reading will be a conversation, so what’s wrong with a little theft of shared or similar experience?
I think what is intimate and what is personal are often confused in America. We anecdote-share in conversation, pass the bucket of trauma back and forth until the scale is roughly equal. So we often crave intimacy even though we are way past the point of too much information. This is why a good novel, a really good one, is so powerful. It provides a different framework for intimacy: one of the mind, rather than of details. And in the end, the mind has control of everything anyway, from how we feel to how we make sense of the world. This is why that title of Jonathan Franzen’s first essay collection—“How to Be Alone”—felt like a stroke of genius. To be intimate and yet alone with a good book is an extraordinarily liberating thing. It can shatter the boundary between you and another in a way nothing can, except maybe love.

Would you perhaps call your “mid-interview explosion with Updike” the occasion for this book?  And if not, what actually made you sit down to write the first sentences?
No, that interview with Updike—which took place an hour after I left divorce court—was the doorway through which I walked into a different style of interviewing. I couldn’t help, when he made small talk, offering up where I’d just been. But afterwards he felt awkward; it had skewed the balance of the interview, which should—as it always should—be tilted toward the subject. What do they think? What do they want to talk about? It’s an artificial form, but the artificiality—as in the novel—can lead you to truth. How does someone’s mind work? What do they sound like when they talk or tell stories? After sitting down with Updike one last time—in my wedding suit, no less, trying to erase myself in a black suit—I decided I’d be much more prudent about offering anything of myself to a subject. I’d be a mirror, not a person. And that’s worked out.

Reading should be a challenge, but also one in which we take great delight. In “How to Read a Novelist,” its title certainly no accident, you give the impression that you’ve enjoyed not only conversing with these authors, but reading them. In the interview sense, what kind of author is the most difficult to read?
I think what the interviewer is reading—or watching, or observing—is the spooky sense of narrative intelligence come to life. Yes, the novelist is a person who wears clothes and looks a certain way. But beyond that an authorial self is a distraction, I think. The meat-comet of daily life. What’s more interesting is how does that narrative intelligence, the one that guides and shapes books, navigate a conversation, questions, the prompt to tell stories? What sort of rooms does it wander into when given conversational freedom, rather than questions that push it into a corner? I tried, in a minor way, to make the interviews I did more open-ended in that sense. To get a writer to do in person what they do in private, and over long stretches of time: to dream.

If you separate this idea from the previous question at all, what kind of author is most intimidating to approach?  You’ve given us bestselling authors and Nobel laureates here, and, though you say it isn’t like approaching a celebrity, I imagine you still have to check yourself before you approach them.
I think it’s always nerve-wracking to interview good novelists. They’re intelligent, and it’s very hard to completely shut down all that social programming to be liked, approved of. Like my questions! Tell me I’m fine! That sounds neurotic, but even the most confident people have doubts murmuring in the background. With great novelists, for me, at first, those voices were like a fucking conga band. DON’T SCREW IT UP!! They will see you’re actually a total idiot. Anyway, over time I became very zen about all this, or tried to be. If the conversation failed, oh well. But that meant I had to be 1,000-percent present in every moment, to try and listen very hard to what the subject was saying and, out of the cloud of associations and images their books had left in my head, quickly grab the most interesting thread from each answer and yoke the conversation forward. It’s why I scrapped prepared questions. I found this method, while being a lot scarier, meant I could at once have a unique conversation, and the pressure of being in the present drowned out any voices of doubt, eventually.

Thinking as a critic, how does the form or content of the authors’ work influence the way you position yourself in your interviews with them?  Do you seek to evoke nuance, or do you give authors the same “treatment,” if you will?
There is a temptation for each interview to slightly mimic the book that occasions the chance to chat—to the point that I once interviewed an ultra-marathoner while running. That’s a bit of a gimmick, though. I think the best thing is to improvise, and out of that collision of chance and riffing I found the interviews took on a life of their own. I’m not a Freudian interviewer. I don’t try to place people in the canon. I’m just trying to see them as clearly as possible, so my hope is these interviews feel as different from each other as the authors did to me upon meeting them. 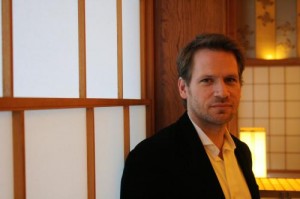 I found what you wrote on Norman Mailer interesting, particularly because as a reader I’ve appreciated him as a cultural critic. What was it like speaking with someone so… sharp?
It was so much fun. There he was, a lion at rest, in his Provincetown home sitting room with a piano six rows deep with family photographs. It was like seeing this rare prize-fighter in a quilty living room. His face, all its lines, his voice—that great gravel—showed he’d been places, seen things, taken punches, but it was somehow behind him by this point. He was willing to talk of it without pride, but as a thing which was already made: his work. His reputation he was letting go of, as we all must, I imagine, as we arrow toward that inevitable end.

How would you say one should develop, or even start, a career in interviews?
By accident, I think. I was given the Paris Review Book of Interviews—from the late 1960s—around the same time as I was living in Boston, and knew one writer who lived there, who happened to have a book out. I dreaded the conversation, but got such a buzz out of doing it, listening to Allegra [Goodman] think aloud, and crack jokes. It made me realize that one of the most exciting things about literature was that it was being made by people. It shouldn’t have been a revelation, but it was to someone coming out of college in the 1990s when theory ruled, when the author was dead. Anyhow, if you do it once and it strikes your fancy, you’re going to find a way to do it again, as I did. Sounds like a drug, I guess, but it’s one that won’t ruin your mind, so there’s that.

If theory ruled the nineties, what would you say rules now?
I think we’re seeing a renaissance in storytelling, which isn’t an orthodoxy but a return to older, less mediated pleasures—which is funny, because we have more media now than ever. Still, in TV, in fiction, in a lot of things, I think we’re seeing people realize, all over again (how could they have ever forgotten?!) the importance of good storytelling.

What’s next for you? Can we look forward to the work of a critic, or will you be trying something new?
I am working on a book about American poetry called “The Alphabet of American Poetry,” which is fun because I’m going back to my favorite recent poets and trying to explain, first to myself, then to the page, why I love them so much. I just finished rereading a lot of Gary Snyder, and I’m feeling like I need to go find a mountain top to sit on.