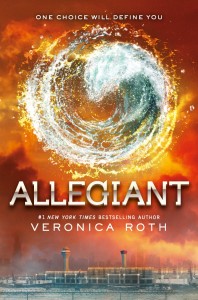 Take the bus to Navy Pier on a dreary afternoon. Buy an overpriced ticket for the Ferris Wheel and ride alone to the top. Look out over the lake and imagine it drained and muddy, a stretch of grey marshland. Look back toward downtown and imagine the buildings cracked and broken.

This is the Chicago of Veronica Roth’s massively popular teen dystopian trilogy, “Divergent.” Roth grew up in the Chicago suburbs, and went to school at Northwestern University in Evanston. After orbiting the city her whole life, she set her series to the rattle of El cars in the shadow of the Willis Tower. At only twenty-five years old, Roth released the final installment to her trilogy: “Allegiant” went on sale October 22.

Roth is one of the latest success stories capitalizing on an end-of-the-world trend—these days, grim, survivalist covers dominate the YA shelves. Most of these books follow similar setups. Some vague tragedy occurred in the past, war or sickness or famine, and survivors must build in the aftermath. Totalitarian governments rise up. Conformity and obedience are rewarded; rebellion is severely punished. Through this wreckage, a hero rises from the youngest generation. Adults are to blame for corruption and betrayals; past generations have failed. Salvation lies in youth.

This formula has worked for a whole subset of YA publishing. “Hunger Games” has dominated the arena since its 2008 conception, but plenty of other titles thrive in the ruins of modern society. Scott Westerfeld kicked off his plastic-surgery-centered series, “Uglies,” in 2005. The first book in James Dashner’s “Maze Runner” series came out in 2009. Lois Lowry’s dystopian classic, “The Giver,” was released back in 1993—and Roth cites it as a major influence. (Perhaps inspired by the genre’s fresh marketability, a movie version of “The Giver” is slated for 2014 release.)

What makes today’s young readers so ready to embrace the end of the world? Is it a side effect of their own inheritance—warring political parties, rising debts, nuclear weapons and constant global pessimism—that makes these fictional accounts hit so close to home? Or is it what broken visions of the future allow—a world where teenagers are not only responsible and independent, but the heroes able to detect society’s cracks and save the day? (Plus, what teenager doesn’t want to hear that their skepticism is basically a superpower?)

In “Divergent,” a fenced-in Chicago is separated into five factions built around citizens’ values: Candor for honesty, Erudite for knowledge, Amity for peace, Abnegation for selflessness and Dauntless for courage. At sixteen, every teen must make a choice: to remain in their born faction or transfer somewhere new—which means cutting ties with friends and family. The heroine, Tris, transfers from Abnegation (where everyone wears grey and only looks into a mirror once a year) to Dauntless (where everyone has tattoos and facial piercings and makes a habit of jumping from moving trains). Culture shock, to say the least.

When Tris and a resistance venture past Chicago’s fences in “Allegiant,” she faces the truth of their ignorance. “We don’t know what’s happened out there since they put us in here, or how many generations have lived and died since they did,” she says. “We could be the last people alive.”

These future worlds spawn constant comparisons to current culture. Critics argue that “Hunger Games” is a commentary on our obsession with extreme entertainment—and the possibility of growing so desensitized that we’d accept a nationally syndicated teen death match with a shrug. Along those lines, “Divergent”’s faction system mirrors and demonizes our own obsession with categorizing ourselves, from high-school-lunchroom cliques to racially segregated cities. (It’s a little ironic, though, that the series often revels in the system it claims to revile—there’s even a “Which Faction Are You” quiz at the end of the first book.)

Amidst the chaos and corruption, “Divergent” manages to be a whole lot of fun. Tris ziplines down the Hancock building. She plays capture the flag in the ruins of Navy Pier. She makes out with her brooding, hunky boyfriend, Four.

Even in the end times, everyone wants a first kiss. It’s another reason these dystopian narratives click so well in a YA genre largely built around coming-of-age stories. Juxtaposed against the last days of the world, typical teenage firsts take on a new shine. It’s a Pandora’s Box cliché—nightmares nurturing stubborn hope. As life gets worse, the good parts get better (or at least they seem important).

“Yeah, sometimes life really sucks. But you know what I’m holding on for?” Tris asks in “Allegiant.” “The moments that don’t suck. The trick is to notice them when they come around.”

But the most striking figure in this genre revival has to be the independent teen. Separated by their families by choice (like Tris’ faction transfer) or force (Katniss volunteering for the Hunger Games), isolation becomes the catalyst for young heroes to realize their power.

And that, in the end, seems likely to resonate with YA readers peering out over the real world they will soon inherit. Old heroes will not swoop in to stitch society’s wounds, but the youngest members of society can salvage the world passing into their hands. It will take violence and sacrifice, but just because things have been bad doesn’t mean they will always be. The message becomes both bleak and empowering: With inherited burdens comes inherited hope. The new generation must be brave enough to take action. They must rely on their own instincts and strengths. And they must have the clarity to see that the world doesn’t just need mending, it needs rebuilding.