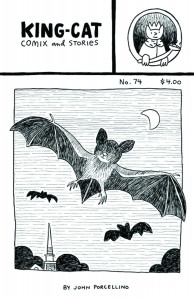 Today, the nineties are glorified as a golden era for independent publishing, a decade when every photocopier ran hot with the printing of punk-rock fanzines and weird-out mini-comics. A lucky few made it big, releasing polished graphic novels with big-name comics publishers. Most just got tired and left the days of staple-bound periodicals behind them.

Through decades of DIY publishing shifts, there’s been a stubborn constant: “King-Cat Comix and Stories,” a zine that John Porcellino has self-published since 1989, and which is released today through his own distro, Spit and a Half. Porcellino started “King-Cat” when he was in high school with simple line comics and hand-written stories about punk rock and mental health, along with tongue-in-cheek fantasy sequences. (One early issue was dedicated to Porcellino’s fictional love affair with Madonna). He often wrote about Illinois, exploring his hometown of Hoffman Estates and the suburbs around Chicago.

“King-Cat 74” was printed in late 2013, with issues still trickling to indie comic stores into early January. The zine feels like a conversation you might share with an old friend, maybe at a diner over black coffee, when neither of you have anything planned for the rest of the day. These comics are in no hurry. They don’t fight to awe or impress. Instead, they feel entirely comfortable with what they are—a funny story about Porcellino’s teenage decision to stop wearing deodorant (and his adult decision to resume); the long-running “Catcalls” letter column (with readers invited to send mail to his P.O. box); a longer piece about his girlfriend, Samantha, discovering a hibernating bat in their attic.

While his contemporaries burned out or moved on, Porcellino just kept going. In 2014, “King-Cat” turns twenty-five years old. Along the way, the comics matured into something quieter, more patient. Porcellino started exploring Zen Buddhism, which lent his writing a meditative feel. Panels became masterfully simple—minimal lines in every drawing, minimal words in every panel, all used for maximum effect.

So why has Porcellino had such staying power in the low-budget world of photocopied zines? The simplest reason for his continued zine success is perseverance. While other artists falter or slow, he keeps to his roots: writing, drawing, photocopying and stapling.

On top of that, Porcellino’s patient storytelling fits perfectly with the zine’s unassuming format. Zines are, by definition, unpretentious publications. Given a few hours and access to a copy machine, anybody can make one. Porcellino’s monochrome covers and hand-lettered pages have the feel of a letter from a close friend. They delve unflinchingly into personal territory, with his depression as a recurring theme. This ends up as ideal zine content: honest in black and white, with a raw edge that never stoops to over-sentimentality or cliché.

Take, for example, “The Bridges of South Beloit” in “King-Cat 74,” a collection of nine bridges and a map of the town in which Porcellino lived from 2010 through 2013. At first glance, they look like crude children’s drawings. But then you see the confidence of the lines, the mastery of the minimalism. That’s when you realize the magic behind the bridge drawings: that Porcellino took the time to study them and capture their shapes in the simplest lines possible. The drawings feel like love notes to South Beloit, a place his friend described as “the most depressing town I’ve ever seen” on the zine’s first page.

It’s comforting, somehow, that Porcellino took the time to chronicle the nowhere bridges of a nowhere town. He makes you want to notice all the bridges you’ve ever seen. And all the tree branches and streetlamps and shapes of clouds in the sky: all the small, easily-overlooked moments of profundity.

It’s all there in a two-page spread titled “Tennessee.” In stark lines and sparse prose, he talks about sleeping in his car on the side of the highway in the rain. The last panel uses only ten bold lines (with four used on the glow of a streetlamp) to shape a curving highway rimmed by trees. “Trucks ease past up the hill and around the bend in the trees. Holy! Holy! Holy!” he writes. And this, in the end, is the source of Porcellino’s quiet power, present in every issue of “King-Cat’s’ twenty-five-year run: the exaltation of the beautiful and unremarkable, the ability to illuminate the holiness of the everyday.

John Porcellino will appear  at Chicago Zine Fest on March 15  and at CAKE May 31 through June 1.