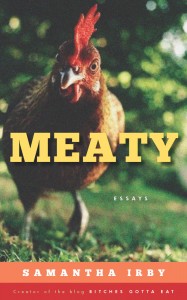 A lot of “Meaty”’s reviews can be summed up this way: “lol omg this girl is talking about how she craps her pants she’s so awesome.” Reading reviews like this, one gets the idea that all Samantha Irby talks about is shit. This is very off-putting if one does not want to read about shit. And it’s very unfair to this slim essay collection, reducing it to a defecation bonanza. So perhaps it’s a good thing Newcity is late to the reviewing feast upon “Meaty.”

Most people would be annoyed, eyebrows raised, a knowing smirk, if upon meeting someone for the first time, they mentioned within five minutes that they wanted a MacBook Pro, they vomited on the train three times in the past eight months, and they needed some more friends. For some reason—her utter lack of guile, perhaps—Irby comes off as charming rather than spoiled or demanding. And eventually, the reason for this tone’s revealed. A girl who grew up taking care of an invalid mother, who accepted her lack of good looks at an early age, who liked hanging out with the moms at parties, who never had anyone to show her how to balance a checkbook: this girl cannot be spoiled. It’s just not possible. At the risk of armchair psychology, her past might be why Irby is so into spoiling herself.

This is not a pathetic book by any means. Irby is laughing at herself and showing great wisdom in doing so. Part of it might be the if-you-don’t-laugh-you’ll-cry thing. Part of it is just sheer outlandishness. The girl’s a great storyteller, but anyone who can pull six half-German, half-black kids who all have names that start with K out of their ass in an attempt to impress judgmental college classmates is going to have a good story to tell. She also doesn’t mind putting down an entire week’s expenses (a lot of burgers and beer and brunch) in print. Clearly not every essay in “Meaty” is a joyful one: grief and privilege and romantic angst make their appearance. But Irby takes such clear joy in getting her point across, in provoking the giggle or the gasp.

That’s what those shit-obsessed reviewers are shocked by—a writer who wants to sit down and get to know the reader, and does so by revealing the dirt under her own fingernails. Some people like a girl with dirty fingernails. And a lot of people do, and should like this one.  (Liz Baudler)