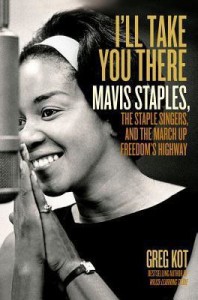 On the radio, Greg Kot is a congenial guy. WBEZ, after all, is not a station dedicated to music programming, and this fact forces “Sound Opinions” to extend their reach beyond music fans, something Kot and co-host Jim DeRogatis accomplish with expertise, luring in listeners more likely to stay tuned for talk radio than to turn the dial in search of actual songs. In print, this broadening approach backfires, as Kot has the uncanny ability to evaporate behind his prose, a skill both enviable and alienating, offering the author a backseat ride through his own book.

The occasions that call for critical analysis are many in “I’ll Take You There: Mavis Staples, the Staple Singers, and the March Up Freedom’s Highway,” though Kot seldom takes advantage. The Staple Singers were a remarkable gospel group who transitioned into mainstream fame during an era when they were confronted by both religious and racial orthodoxy; yet life events that call for greater reflection in the wake of this context, the suicide of young Cynthia Staples for instance, or Mavis’ divorce, receive no such treatment. How is it possible for the gem of gospel groups to endure sacrilege? The question is left unasked.

Their story is captivating for reasons innumerable, though if it weren’t for the Staples Singers’ formidable discography, the tale would fall flat. Kot is wise to pick up on the eternal resonance of “Uncloudy Day,” offering a chunk of a chapter to describe the song’s appeal, easily his most inspired piece of criticism throughout the book. Coupled with the preceding discussion of Roebuck “Pops” Staples’ sharecropping childhood, the recounting takes on a greater nuance due in large part to Kot’s access to Pops’ unpublished autobiography. Tasked with engaging the personal history on his own terms, Kot proves to be a writer of calculated clarity, but when resigning himself to support an endless stream of anecdotal quotes, Kot’s presence recedes from his prose altogether, leaving the reader conflicted about his purpose.

The book simply lacks the conviction afforded to critical authorities. When the Staple Singers’ biggest success is recounted, the recording of “Respect Yourself,” it is revealed that Al Bell, co-owner of Stax, played the role of Dr. Frankenstein in orchestrating the sessions. At Muscle Shoals, Bell oversaw the group as they cast aside Pops’ signature guitar in favor of session players, assembling disparate parts that included flourishes from Terry Manning, an engineer at a different studio in a different state. This is after Bell co-opted the song from the original songwriter. Instead of taking the liberty to reflect on the questionable role that a record label executive had in substantially altering the group, Kot abides by the hackneyed understanding of 1971’s popular response: “An unassailable balance was struck between the raw inspiration of the artists and the refinement of cutting-edge studio-as-instrument technology.” The author must contradict himself in his “unassailable” assertion, as the next chapter finds Mavis protesting Bell’s songwriting credit megalomania.

All the portions of “I’ll Take You There” that seem potent at first (Mavis was the object of Bob Dylan’s desire, Prince played a crucial role in her solo career) end up being unremarkable after cursory research. At 286 pages, this book is less a definitive work of criticism on the Staple Singers, and more a coronation of Mavis, whose solo work is accounted for up to the present. That Kot found it fruitful to include a curated discography at the end of the book is telling: insights into the group’s recorded output should have already been made obvious. Kot’s unwillingness to embrace music fanaticism in all its pertinent details and prose-fostering passions is his ultimate downfall, and he acknowledges as much when endorsing Anthony Heilbut’s foundational work on the genre. As Kot sees it, “His book ‘The Gospel Sound’ remains the definitive overview of gospel music.” I couldn’t have said it better myself. (Kenneth Preski)

“I’ll Take You There: Mavis Staples, the Staple Singers, and the March Up Freedom’s Highway”
By Greg Kot
Scribner, 320 pages, $26