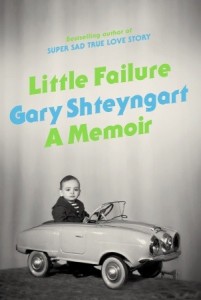 Gary Shteyngart has cornered the market on the fairly useless modern invention: the book trailer. Along with his famous lil’ buddy, James Franco, he’s managed to go viral more than once. He was one of the first authors to popularize the book trailer for “Super Sad True Love Story, ” also featuring Franco, with Shteyngart as an immigrant writer who could barely read or write English. The trailer for his memoir, “Little Failure,” features Franco and Shteyngart as a couple in pink bathrobes, where Franco overshadows his lover with his own recent memoir, “Fifty Shades of Gary.” Aside from yet another opportunity for Franco to play Is He or Isn’t He? the trailer really does showcase the humor contained in “Little Failure,” but what it doesn’t hint at is the quite serious approach he takes to examining his own role as a male Russian immigrant to New Jersey and how that has informed his writing and his development as a person.

Shteyngart excels when he steps back to examine the cultural and familial pressure he’s under to succeed. The book is filled with some frankly stunning images of the artist as a child, with all the fear and anxiety written plainly on the younger version of the face we know from those book trailers. In one rather bizarre image, he’s climbing what appears to be an indoor jungle gym—it turns out his father built a ladder in the living room for him to conquer his fear of heights, and he was encouraged to climb a bit higher every day. He writes about the casual violence he suffers as a child at the hands of his parents, swift blows to the head and neck, the sort of thing that goads him through his teens and adulthood. He never names the relationship he had with his parents as abusive, but calling out his parents for their behavior drives most of the book. “Little Failure,” for example, is a pet name his mother called him, translated from the Russian. His father preferred “Snotty” for his asthmatic son. Shteyngart frames the day-to-day violence in his family within the larger view of his extended family. One family member, for instance, hammers a nail into the neck of his spouse (an event eerily similar to an ex-girlfriend later in life). And furthermore, he writes about the history of violence acted upon his Jewish family by the state. Whole swaths of his relatives are killed in pogroms and labor camps, leaving an indelible mark on the survivors. All this he writes about as if shrugging off an old memory. Under a picture of his father and extended family in Ukraine, 1940, he writes, “Just about everyone else is going to die soon.”

The photographs of the author as a child give way to less charming images as he ages into the 1980s and 1990s (a difficult time for any of us to maintain teenage charm, admittedly). We see him morph into a cliché of an Oberlin undergrad—long hair, smoking a bowl. “Little Failure” has a David Sedaris quality, which can move the reader from laughing out loud to not quite tears but thoughtful introspection in the same chapter. At the same time, he’s creating an almost Hemingway-esque mythos as the powerful male writer who holds both his liquor and his drugs well and at least lusts for the girl, even if he doesn’t always get her. It’s as if he’s firmly staking his own claim in the canon of American male writers. On his writing, which most readers will presumably be interested in, he brings a startling honesty—he borrows heavily from his own experience, he identifies friends and acquaintances he based characters on, he admits to no writer’s block. “I went back and reread the three novels I’ve written, an exercise that left me shocked by the overlaps between fiction and reality I found on those pages, by how blithely I’ve used the facts of my own life, as if I’ve been having a fire sale all along—everything about me must go! On so many occasions in my novels I have approached a certain truth only to turn away from it, only to point my finger and laugh at it and then scurry back to safety. In this book, I promised myself I would not point the finger. My laughter would be intermittent. There would be no safety.” Insightful, broad in scope, and truly funny, “Little Failure” is sure to delight Shteyngart’s readers, but more than just a memoir of a relatively young artist (he was born in 1972), the book is an incredible examination of the immigrant experience and this single child’s journey with his parents to a new world. (Kelly Roark)