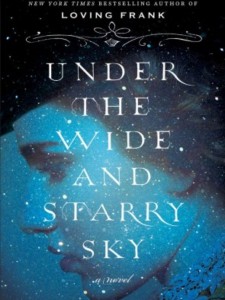 Gypsy, vagabond, nomad, bohemian dandy, consummate storyteller. Robert Louis Stevenson was all of these, and more. He is both familiar and yet strangely unfamiliar. We may recognize the name but who was the person behind the famous moniker? Even the most casual reader knows that he is the author of such literary classics as “Treasure Island,” “Kidnapped” and, most famously, “Strange Case of Dr. Jekyll and Mr. Hyde.” Unlike other iconic literary figures of the nineteenth century though—Poe, Dickens, Wilde, to name a few—Stevenson, for many, remains a cipher.

Before she started researching her new novel, “Under the Wide and Starry Sky,” Nancy Horan didn’t know much about him either. “I probably read ‘Jekyll and Hyde,’ ‘Treasure Island,’ and ‘A Child’s Garden of Verses’ in high school, possibly ‘Kidnapped,’” she told me. “That was about it. I thought of him as a boy’s adventure writer.”

Horan was in Chicago recently to promote her novel, addressing a full house at the University Club. A former teacher and journalist who lived for many years in Oak Park, Horan made a literary splash in 2007 with the release of her debut novel, the best-selling “Loving Frank,” about the tumultuous relationship between architect Frank Lloyd Wright and his mistress Mamah Borthwick Cheney.

The one thing both novels have in common is Horan’s love of story. She is interested in exploring relationships between men and women, uncovering their inner lives. And although her new novel is about the thorny and complicated relationship between Louis and Fanny Stevenson, two very strong personalities, she makes clear that she is not interested “in writing books about the unsung woman behind the famous man. I like looking at the choices that people make—the whys of the story.”

“From start to finish,” it took Horan five years to research “Under the Wide and Starry Sky” (the title comes from a line in Stevenson’s self-composed requiem). Horan prefers to hew as closely to historical truth as possible, and then fill in the blanks. “I love writing about real people with a factual record,” she says. “Then I come to my own conclusions.” She read biographies, unpublished works, family papers, letters and diaries of both Stevensons: she even includes a few excerpts from Fanny’s diaries and letters. The more she read the more she became fascinated by this oddest of couples.

“I fell in love with Fanny and Louis. And in a sense I took a journey with them,” she says.

There have been plenty of Stevenson biographies published during the last two decades or so alone, including Claire Harman’s “Myself and the Other Fellow” (HarperCollins), Philip Callow’s “Louis” (Ivan R. Dee), and Ian Bell’s “Dreams of Exile” (Henry Holt) but, until now, no one has attempted a fully realized fictionalized portrait of his rich and tortuous life (in 2004, Canongate published “Stevenson Under the Palm Trees,” Alberto Manguel’s slim novel about Stevenson in Samoa). Even less has been written about Fanny. The most recent biography of her, “Fanny Stevenson: A Romance of Destiny” (Carroll & Graf) by the French writer Alexandra LaPierre, was released in 1995.

Louis, as Stevenson was known, and Fanny were two very different people. “They came from such different worlds,” says Horan, “…yet they found common ground.” He was the only son of Thomas Stevenson, of the so-called Lighthouse Stevensons (and the topic of Bella Bathurst’s acclaimed eponymous history) and among Edinburgh’s most prestigious families while she came from Indianapolis of modest middle-class Dutch and Swedish stock.

“Fanny was an American girl,” says Horan, matter of factly. Both had a strong bohemian bent coupled with an equally pronounced rebellious streak. “Stevenson met his match in Fanny,” says Horan.

Plagued by chronic respiratory ailments, Stevenson was a sickly man who spent most of his life chasing the sun, trying to keep one step ahead of his failing health. But he also was insatiably curious and had a ravenous thirst for travel, as he hop-scotched around the world, from his native Scotland to England to Switzerland to France to America before finally settling in Samoa, where he died from a cerebral hemorrhage in 1894 at the age of forty-four. Horan visited his childhood home in Edinburgh (now a bed and breakfast); she even slept in his parent’s bedroom and visited the places where he was at his happiest (Hyères, France) and at his saddest (Bournemouth, England, where the bed-bound Stevenson wrote “Jekyll and Hyde”).

And yet despite his debilitating illnesses, he never stopped writing. “He was a literary athlete,” Horan says, with obvious admiration.

“Under the Wide and Starry Sky” is, in a sense, homage to two courageous lives: a juicy, enthralling novel—compulsively readable—ripe with colorful characters and grand set pieces, ready-made for the cinema.

Still, Stevenson’s legacy in the U.S., says Horan, “is an odd one.” While people use the phrase “Jekyll and Hyde” as shorthand for “the duality of the human spirit,” and most know he wrote the story, they know little if anything about the man himself. “It was learning of his connection to America that really pulled me in,” says Horan.

Indeed, Louis had a strong connection to the U.S. Not only was Fanny from Indiana, but they were married in San Francisco and spent their honeymoon at the top of an abandoned mining camp near Calistoga in northern California (now Robert Louis Stevenson State Park). And no less than three museums are dedicated to him: in St. Helena, California; Monterey, California; and Saranac Lake in upstate New York.

While Louis comes across as instantly likable, if eccentric, Fanny is a bit more, well, complicated. In fact, she was a controversial figure. Some biographers have criticized her as being overprotective, the literary equivalent, Horan suggests, of Yoko Ono. “I’m not trying to make her into an angel at all,” says Horan. “But in my view she was remarkable.”

Stevenson’s literary fortunes have waxed and waned over the decades. A giant of the nineteenth century, his literary stock had fallen considerably in the twentieth century even as Hemingway, Nabokov and Borges acknowledged their debt to him. But now it seems to be once again on the rise.

Stevenson was also a strikingly modern man (“He hated the class system he had been born into,” notes Horan). Witty, kind, a brilliant conversationalist with a fondness for the underdog, he remains a larger-than-life figure.

“Under the Wide and Starry Sky”
By Nancy Horan
Ballantine Books, 474 pages, $26