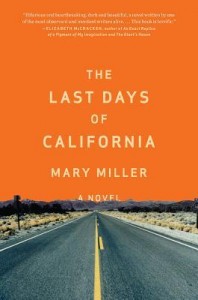 There are plenty of apocalyptic young-adult fiction books these days, but Mary Miller’s debut novel, “The Last Days of California,” has a fresh approach to an end-of-days story. Jess and her family are driving from Alabama to California for what her father believes is Armageddon. Based on the prediction of a prophet from their unspecified church, Jess’ father envisions a scenario of bodies floating up into heaven, as in the “Left Behind” series of books. Fifteen-year-old Jess wavers in her belief as they travel across the country, not quite sure if she’s about to experience the rapture, or even whether she believes in God or the teachings of her church at all.

Sitting next to Jess in the backseat is her sister, Elise, newly pregnant. Although only a few years older than Jess, the world-weary Elise is cynical beyond her years and firm in the belief that the end is nowhere in sight. Her only fragility is her inability to acknowledge her pregnancy, aside from telling her sister and then seemingly forgetting about the topic entirely. Miller’s pacing of the novel is really important, considering what is practically the closed set of the family car and a few motel rooms. While she’s unfolding Jess’ relationship with her family and her evolving ideas about religion, she’s rather brilliantly tied the awakening of a young girl to a ticking clock in the background.

The book begins in Louisiana on Wednesday, and their destination is California, and the end of the world, on Friday. Anyone who’s made a cross-country trip will easily recognize the long, hot, dusty undertaking, punctuated only by stops to gas stations and minor variations in road food, if you’re lucky. Wednesday, however, is a doozy. While silently processing her sister’s pregnancy and handing out leaflets about the end of the world at truck stops, the family observes a fatal car accident, and Elise disappears with a stranger she meets at a bar near their motel.

Guided more by the influence of her adventurous older sister and perhaps partially by the idea that the entire world is coming to an end, Jess positions herself to have a sexual experience of her own. Meeting boys proves relatively easy at roadside motel swimming pools, especially with her beautiful sister nearby. Poor Jess has all the complications and contradictions the average teenager faces with the added fear that life as she knows it will be over by the end of the week. The sentiment is spot on—the feeling that the world will end if this or that happens or doesn’t happen is fairly common for teenagers, so Miller’s premise is all the more perfect. After meeting a boy and performing a hasty hand-job in a van, Jess and the boy make vague plans for the post-rapture (if she’s still on earth). He tells her to text him, and she says she doubts their cell phones would work. It would be hilarious if it weren’t so damn sad. On Friday, of course, they have a chance to choose their last-day activities—what they don’t do seems most interesting.

Although it doesn’t seem that Miller’s tale is meant to be a metaphorical interpretation of what it is to be a teenage girl, she certainly has pinpointed some very universal themes. Her father is the overbearing patriarch intent on following his own ruinous instincts. The mother is worse—gently closing her eyes rather than acknowledging what’s happening under her nose. But most poignant and painful are Jess’ feelings of insecurity and hyper-awareness of her own body and other people’s bodies. Each person in the book is literally sized up by this fifteen-year-old—an aspect that was initially annoying, but actually a habit many girls (and women) have. At an impromptu motel-room party, Jess hides in the bathroom, thinking, “I would always be separate, thinking about what expression my face was making, what people thought of me. Observing peoples’ weaknesses and flaws—their big thighs and crooked teeth and acne, their lack of confidence, their fear. I would always think the worst about people and it would keep me from them because I couldn’t accept myself.” Despite the subject matter, “The Last Days of California” is surprisingly uplifting. As midnight approaches and they all ask themselves in which time zone the rapture might begin, it seems likely this family might have a future after all. (Kelly Roark)