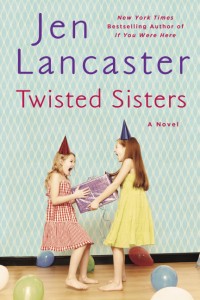 Jen Lancaster signs her books with neon bright Sharpies: yellow, orange and hot pink. Women line up in the Theater Wit lobby with books pressed to their chests, some sipping champagne from plastic flutes (a glass came free with ticket purchase). When it’s their turn with Lancaster, the author asks them about their haircuts, their jackets, how far they drove to get to the event. “I’m so glad you could make it!” she says again and again, like a gracious hostess—and somehow it seems genuine every time. When anyone holds up an iPhone and asks for a picture, Lancaster always agrees.

Everyone wants to be Jen Lancaster’s best friend.

In February, the New York Times bestselling author signed books and answered questions at Theater Wit’s screening of “Freaky Friday” (“The most excellent version with Jodie Foster, none of that Lohan bullshit,” she teased on her blog, jennsylvania.com). The Book Cellar hosted the event in honor of Lancaster’s newly released body-swap novel, “Twisted Sisters.” Since publishing her first book in 2006, Lancaster’s written ten books total (seven memoirs and three novels, all generally labeled “chick lit”), and she’s turned a cult-like following into major mainstream success.

Her books capitalize on a careful mix of pop culture references, unchecked narcissism and just-the-right-kind-of-cruel observations, powered as much by Lancaster’s personality as her literary merit. Lancaster’s celebrity is a curious brand—the marketing of wordsmith as BFF. And in person, her balance of warm and wry translates perfectly off the page and into real life. She peddles bestseller after bestseller by being the kind of woman you’d want to gossip with over tropical drinks.

If the “Freaky Friday” crowd is any indicator, Lancaster’s fan-base is almost entirely white females, ranging in age from twenties to fifties. She has more than 68,000 Facebook followers enthusiastically commenting on her posts. Her Goodreads average is an impressive 3.92 (the same as Margaret Atwood’s, for what it’s worth).

Lancaster’s literary launch is a sort of fairy tale success that either inspires people or leaves them seething in jealousy. After getting laid off from a high-ranking, well-paid position at a technology firm in 2001, she started blogging about unemployment. Her snarky brand of humor got popular quick, and she tried her hand at writing books. In 2006, she released her first memoir, “Bitter Is the New Black” (subtitle: “Confessions of a condescending, egomaniacal, self-centered smart-ass, or why you should never carry a Prada bag to the unemployment office”).

Her following memoirs trace everything from weight loss goals (“Such a Pretty Fat”) to hating her Chicago neighbors (“Bright Lights, Big Ass”). In 2013, she added to her memoir repertoire with “The Tao of Martha” (My Year of LIVING, or Why I’m Never Getting All That Glitter Off of the Dog), chronicling twelve months’ living by Martha Stewart’s tenets. As for her meandering subtitles? Publishers now ask rookie memoirists to come up with “Jen Lancaster titles.”

“Twisted Sisters” brings the sharp voice perfected in her memoirs to a fictional narrator, reality TV psychologist Reagan Bishop. Reagan monologues on everything from her network TV aspirations to how much she hates her charming younger sister, Geri, in an array of dizzyingly clever paragraphs that manage to reference everything from “Twilight” to Jay-Z lyrics to Lynda Carter’s Wonder Woman. In a supernatural twist, the sisters swap bodies. Predictably, hilarity and enlightenment ensue.

When Lancaster hits the Theater Wit stage for the Q&A section of the evening, her husband Fletch (forever immortalized in her memoirs) brings her a drink—bright orange with a pink umbrella. As she sips, the conversation stays light and unpretentious (just like her books), focused more on her personal life than her literary craft. Who should play her in the (inevitable) movie of her life? Melissa McCarthy. What superpower would she choose? Bionic hearing, so she could eavesdrop when people talk about her.

In the end, Lancaster’s success is no real secret. People like her. They want to text her about reality TV and drunkenly watch 1970’s Disney body swap comedies and invite her to be the life of their parties. And in lieu of hanging out with her, they want to read her books.