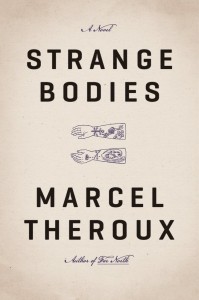 In the preface to Marcel Theroux’s highbrow thriller “Strange Bodies, ” Nick Slopen stumbles onto the doorstep of an ex-lover, who’s profoundly confused, and for good reason: Nick died months ago, crushed beneath the wheels of a lorry. The man claiming to be him looks nothing like him, but something—the intensity of his gaze, his mannerisms, his knowledge of her old nickname—convinces her she must be mistaken. Nick leaves behind a revelatory document written during his confinement at the Maudsley psychiatric hospital, the reader is invited to read it. Naturally, we can’t resist.

Nick, a top scholar on the works of Samuel Johnson, has been summoned by music mogul Hunter Gould to authenticate a set of documents apparently written by Johnson himself. The letters turn out to be nothing more than convincing forgeries. When he tells Gould that the seller, Sinan Malevin, should be arrested for selling phony documents, Gould surprises him with a confession: he knows they’re forged. Sinan isn’t selling them; they simply wanted a professional’s opinion.

Where it might risk turning into a rote thriller, “Strange Bodies” elevates itself by adhering to the academic tone set by its narrator. The mystery is heavily dependent on consciousness and language; Theroux argues that our choices involving words—the order in which we speak them, how many we use, how we use them to demonstrate our understanding of the world—comprise enormous parts of our identities.

In one scene, Nick argues with a woman named Vera about the dichotomous relationship of science and art. Nick posits that one deals in facts and the other doesn’t. Vera exclaims: “You are so limited! Science, it’s a process of creation too. Literature itself is a species of code. You line up symbols and create a simulacrum of life.”

While Theroux spends considerable time indulging in these theories, his peripheral narratives approach a simpler, more common concern: finding value in the everyday lives we lead. There’s something ironic about Nick’s being pulled into such complex machinations while he spends most days buried in books, dealing with teenage apathy, and hoping to rebuild his crumbling marriage. His concerns and fears are of a universal set; we don’t need to be scientists to desire love, to contemplate mortality, to wish someone close to us could return from the dead. While none of us is Nick Slopen, we all are, in a way: “The stranger inside me is a creature like every other: obsessed with the limits of his existence, haunted by the spectacle of his passage through time, the blossoming and deterioration of his relationships with other creatures, the unutterable sadness of a finite life on a beautiful planet.”

“Strange Bodies” is elegiac, beautiful, and like life itself, over all too soon. (Derek Harmening)