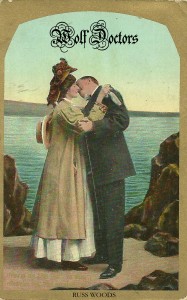 Silly, surreal and surprisingly sensitive, Russ Woods’ “Wolf Doctors” points the way toward a rare post-avant-garde accessibility. His associational mish-mashes (dogs, horses, hotels, factories, Netflix fees and human beings seem all interchangeable and spirit-laden in his world) usually avoid stepping over the line of gimmickry in this collection, leaving enough room for his tickling humanity to poke through. Woods’ persistent charm is poised to break even the most logical, most narrative-obsessed of readers—such that by the time you reach the home stretch of these chambers of play and oddity, a line like “Illinois was the best horse I ever had” lands with startling heartbreak. More genuine than Donald Barthelme—a sure influence on Woods and most releases from Chicago-based Artifice Books—”Wolf Doctors” capitalizes and builds upon paths of weirdness forged by its stylistic forebears. Woods’ gnarly concoctions mystify, yes, but they also hit with a force that can only be described as Pop. Work like this (light, fast, touching, amusing, fun) inspires real confusion as to why writing with even three dashes of the supposed “experimental” is outside of the walls of the mainstream. Any disarmed audience, unconcerned with Cliffs Notes keys to reading, can experience this book with the same tizzied levity they would scrolling through the day’s roundup of GIFs. My fear heading in was that Woods’ gymnastics would give way to meretricious tendencies; to referential hoopla that leaves all without an MFA out of the conversation. But fear not: in “Wolf Doctors,” wonder and love win out as the text finds the whimsy within bad dreams, and reaches willfully into many of our most precious personal caverns. (John Wilmes)