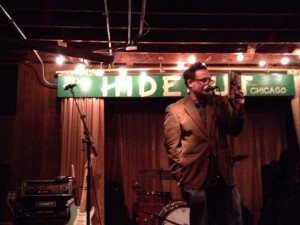 “As far as I know, the only people who have read the book are three women, all twenty-five and under, and two of you said, ‘I have no interest in having kids, but I liked the book,’” said Ben Tanzer. The Chicago author, publisher and podcaster was referring to his new essay collection “Lost In Space,” adventures in fathering his two sons, Myles and Noah. “Lost In Space” drips with pop-culture riffs and love letters to Chicago; it’s a book non-parents can wholeheartedly enjoy and actual parents can appreciate. Ben Tanzer and I chatted over Cuban coffees and Latin music about the hard jobs of writing and parenting.

Whenever I’ve heard you read, you’ve focused on relationships.
I am very into relationships. Sometimes it’s conscious, sometimes less so, but I’ve always been drawn to how people connect and how things get disrupted. In our lives, the most confusion’s around relationships, so how do we communicate, what’s real? How we can say things to people that we know are a mistake.

When you’re capturing a real-life relationship, what details would draw your eye?
I get stuck on how people said certain things, how they reacted to certain things, how people literally actually talk, and what their body language is like. Sometimes someone will say “you barely describe what’s going on around you, only what’s inside of you and between you.” I was trying to capture what it’s like to be in constant conversations with your spouse, with your kids, with yourself.

One of the most striking essays has you watching “Star Wars” with your sons, and you want to have this discussion with them but they weren’t responding the way that you wanted them to.
My dad would say, “When you were a kid I’d say, ‘Look, there’s a cow outside the window,’ and all you’d want to do is look in the ashtrays. It didn’t matter that there was a cow on the side of the road.” There’s that beginning piece where you just want your kid to look at anything, and then the second piece where you want them to look at things like you look at them, which is worse, but then there’s this third level, which is like, “heeey, they’re excited, I’m excited, let’s use this to teach.” I’m sure there’s a part that’s like, “why can’t you just let them enjoy ‘Star Wars’”; for a long time, they didn’t want to watch it at all.

How has writing helped you be a better parent?
Children benefit from consistency and structure, and that’s what I’ve adopted as a writer. I don’t wait for inspiration, I don’t wait for the muse to hit. I know people say, “I didn’t write for weeks; it hit me and I wrote for two days straight.” I’m very much about being consistent and creating an opportunity to write. On the other hand, parenting has probably helped writing. I’m even more in touch with the range of craziness in my own head. 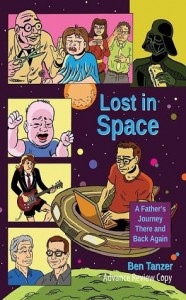 So let’s talk about balancing work and creative life.
If you say work is a priority and kids and spouse are a priority, you fold the writing around that. Some days it opens up in ways that are beautiful and very easy, and other days it’s manipulation. It’s really not balanced, it’s literally trying to do everything, and then trying not to do things that get in the way.

In one essay you highlight famous dads, good and bad. Which father is most analogous to you?
I’m trying to think of a dad that’s really loving and slightly filled with rage, but doesn’t direct it toward his kids. I have a well of rage and it’s really scary to me and I can’t stand it. If I say that at parties, people get horrified.

How do the kids feel about the book?
My older son keeps saying, “If we’re in it, why can’t we read it?” There could be a whole different book that’d be way more embarrassing and violating. It’s intended to be loving. I think if it reflects badly on anyone, it’s me. They should be characters in a book about me—I shouldn’t be trying to capture their thoughts or telling their stories. I tell my story in relation to them. I thought that it would be putting one person’s parenting style on the table and then trying to be as honest about that as possible. It’s not a case study either. The only behavior I’m trying to figure out is mine.

“Lost in Space: A Father’s Journey There and Back Again”
By Ben Tanzer
Curbside Splendor Press, 200 pages, $14.95

Lovely and sincere interview that didn’t hype, which is very refreshing. Good Luck on the book, it sounds interesting and timely.