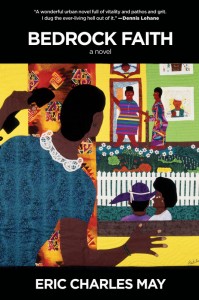 Eric Charles May and James Baldwin share more than skin color and writing passion. They are masters of the complicated operas that unfold in a particular place, of the complexities and frailties of mankind. “Bedrock Faith” is May’s first novel, and since approaching Baldwin is no idle feat, one only hopes he’ll write more.

Parkland is a proud, entrenched African-American community on the far South Side of Chicago, just touching Blue Island. The characters we hear from have owned their homes for generations, pillars in their close-knit community. All of it goes to hell the day Stew Pot Reeves comes back from prison. He’s no average neighborhood terror; in his younger days he decapitated a cat and lit a garage on fire. But now, he’s a Christian—a very devout Christian who has lost none of his old fondness for meddling. In short order the neighborhood, already tense, nearly explodes into uproar.

It’s a neighborhood story, so there’s a huge cast of characters: some major, most minor, but May deftly juggles them and stints no one. The only folks who are flat are the dead ones. The central pair of the book, Mrs. Motley and Mr. McTeer, an older couple teetering on the edge of actual romance, fascinate not just for the depiction of a senior couple in an awkward stage, but also because their convictions lead them in such opposite directions on the Stew Pot problem and into constant battle with their neighbors. While no one approaches Stew Pot’s level of depravity, questionable decisions are made in the name of justice—and May lets them make them.

This is not a novel of either pyrotechnic language or actions. (In fact, some of the word choice seems a bit sloppy at times, but that’s a minor detail.) This is a novel of slow accumulation, of creeping dramatic weirdness that pushes otherwise decent people to the brink. Yet it’s not a thriller, and when May dabbles with criminal territory and police procedure, it seems just a bit out of place, although a second reading reconciled me to the book’s resolution. Simply put, “Bedrock Faith” is about a neighborhood and the people who live there, the same way “Another Country” is about a group of artists in New York City. Which is to say, the people who live in both explain so much by their sheer humanity. (Liz Baudler)