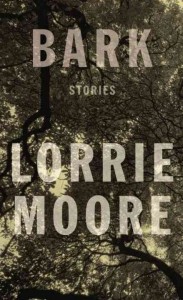 Lorrie Moore is widely regarded as one of our greatest living American writers, and for good reason. Her short stories are exquisite examples of the form, and her long-awaited collection “Bark” is no exception. The worst thing about it is, at 192 pages, it’s a bit on the short side. All of Moore’s stories move brilliantly between the individual and the universal. One way she does this is by referencing current events, like the day Michael Jackson died, or the night before the Abu Ghraib prison photos broke. Like “A Gate at the Stairs,” which is very much a post-9/11 novel, the characters in “Bark” continue to be worried by the war, both its effects and its non-effects on us. “Debarking” takes place in the GW Bush era. ‘“You’re supposed to give things up for Lent. Last year we gave up our faith and reason; this year we are giving up our democratic voice, our hope,’” says one character. In “Debarking,” Ira, a newly divorced dad, begins dating a woman and also, essentially, her son. Moore skewers indulgent modern parenting (“Oh, we couldn’t leave Bruno here alone. He’s only sixteen.”) and childhood education (Ira’s daughter studies the stock market while finger-knitting).

Some of the stories are playful—there’s a ghost story about a woman whose friend has just died. There’s a story based on “The Wings of the Dove” by Henry James and another based on a short story by Nabokov, “Signs and Symbols.” Read Moore and Nabokov’s stories back to back and marvel at how boldly she culls her story from his, and turns it into something entirely her own. “Paper Losses” is about a woman who goes with her husband and two children on a cruise planned before their marriage fell apart, rather than see another woman take her ticket. Artifice surrounds them, the about-to-be-divorced couple, people on the beach reading books about genocide “to add seriousness to a trip that lacked it.” A line that reverberates, “Later, when she had learned to tell this story differently, as a story,” sums up what we all do—we turn our lives into stories with satisfying arcs and endings.

Humor invades all of Moore’s stories, like the couple who met at a anti-nuke rally and are now “a little pro-nuke” or a man who plays a melancholy version of “I Want You Back” at his ex-wife’s wedding. What’s really marvelous is that the humor lives in perfect harmony with her work. She also brings a Midwestern sensibility to her writing—something Chicagoans might appreciate, although she’s been known to poke fun at Midwestern culture (don’t laugh, there is such a thing). Moore recently left her position at UW-Madison, where she’s been since the mid-eighties, for Vanderbilt University in Nashville, Tennessee. One selfishly hopes she doesn’t lose her Midwestern framing for a Southern one, but, in any event, the anxious waiting for her next work begins again. (Kelly Roark)