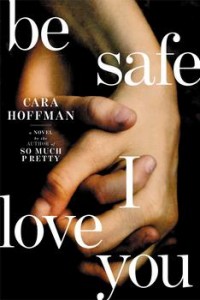 When Lauren Clay returns from her tour of duty in Iraq, everything in her small town seems wrong. When she left, her father could barely care for himself or her kid brother—it’s the main reason she joined the army, so she could support them. When she returns, her father is capably leading the household, everyone is well, except for the dog, who died before her return. But the town looks wrong; every building looks like a façade, and her friends have changed or not changed in ways that don’t make sense. Also, she sees the dog. In “Be Safe, I Love You,” Cara Hoffman’s young soldier does a good job hiding her post-traumatic stress from her loved ones. All her life she’s been the responsible older sister; when she returns from war, her greatest priority is her brother. Without her pack, her gun, and her Kevlar vest, their small town feels as unsafe as a battleground to her.

Hoffman is no stranger to delving deep into the expectations of feminine behavior—her first book, “So Much Pretty,” is devastating and brilliant, a fury-driven story of violence against women. In “Be Safe, I Love You,” she continues to confront feminist issues like the role of the female soldier as well as more challenges of small American towns near army bases: low employment, few professional choices, religion, even a hierarchy of soldiers. One of the Clay family’s best friends is a man who fought in Vietnam, who also returned with PTSD. Lauren sneers at his experience, “I didn’t get drafted. I wasn’t some sitting-target chump with eight weeks of basic. I enlisted. I was educated. I had people under my command… I’m alive and there’s not a scratch on my body.” Hoffman, whose brother was a soldier, writes lovingly and respectfully of the soldier’s experience, but this is a writer who doesn’t sugar-coat anything. It’s slightly horrifying to read how Lauren “clears” her house when she hears a bump in the night, how she points a gun at her friend’s head, longs to push her perceived enemies to the ground and hold them down with her knee. Lauren’s friends and family struggle to give her space to relax back into civilian life and don’t realize before it’s almost too late that her actions are becoming dangerous. “But they were supposed to pretend, even now when they had no idea where she was or what she could be doing, even as they lived in the shadow of the base, and heard reports from places like Fallujah, or read about disastrous brutal homecomings, they were supposed to pretend that what she did was some angel’s work in hell.” (Kelly Roark)