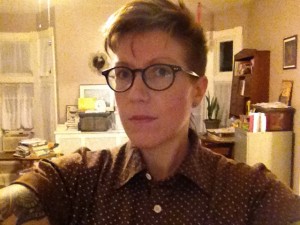 I first encountered Megan Milks’ work when we were both fledgling critics for PopMatters. Her writing stood out as intelligent, daring and quite promiscuous in its range of ideas. She went on to found the zine “Mildred Pierce” and contribute to the avant-lit blog Montevidayo. And I’m still reading her today.

Milks’ stories in her debut collection “Kill Marguerite” draw influence from cultures both high and low, from Homer and Joyce to video games and teen magazine columns. They never sit quietly, but rather unsettle convention and defy expectation. In fact, the moment you think you know what’s happening, the story opens into an unexpected black hole, thrusting you into a passage that devours and reconfigures expectations.

Many of the stories in “Kill Marguerite” play with structure—what draws you to changing the short story as a form in ways that often incorporate pop culture and genre conventions anew?
The short story is my playground […] My interest in popular forms and genres derives from this interest in constraint and revision. Popular narratives are of course typically very limited in the kinds of identities and experiences they produce. At the same time they are malleable and subject to revision (see fan fiction). In repurposing forms like teen mag columns and video games, one motivation is the desire to queer these forms. (I mean “queer” as a method of challenging both compulsory gender and heterosexuality.) “Kill Marguerite” implants a feminized mean-girls narrative into a masculinized video game structure, refusing the gender-specific presumptions of both genres.

Are you trying to rewrite the narrative of the young girl?
Oh—sure! That’s a really terrific synopsis of the book, actually. Like so many of us, I grew up internalizing the dominant narrative of the young girl as the pretty girl, the skinny girl, the good-sometimes-bad girl, the ideal reader of Seventeen magazine. (Of course all of these girls are white and affluent, too.) Even though I was also listening to Ani DiFranco and Tori Amos and Hole, it was like I just couldn’t recognize alternative ways of existing as a girl-assigned person in my environment. So yes, I suppose rewriting these young-girl narratives of the eighties and nineties is one way of producing an alternative adolescence that more readily accommodates queerness, masculinity, fatness, violence and the grotesque.

What literary influences were significant to you as a teen reader? Which do you still hold dear now?
I love this question—absolutely, all of these genre/YA influences have informed my work. When I was a teen (and younger), I read everything that was available at my public library. I would bring home thirty books a week (I think that was the limit) and read read read. I read a ton of YA series books, alongside horror and fantasy, and— how could I forget—V.C. Andrews. So many lurid narratives! A ton of Stephen King and Clive Barker, as well as Christopher Pike, Piers Anthony, “The Baby-sitters Club,” “Sweet Valley,” “Nancy Drew.” As part of the Tori Amos fan community, I was introduced to Neil Gaiman and the world of comics. I went through a Michael Crichton phase, too—I remember being made fun of for nerdily reading ”Jurassic Park” while walking the half-mile to and from the bus stop. I was also reading Joyce, Dostoevsky, Shakespeare, Poe—very few women writers, sadly, though I did love Jane Austen. Faulkner was my number one—especially “The Sound and the Fury,” which blew my mind.

Your characters’ bodies emit slime, vomit, tears, feces, blood and more. It seems that the stories revel in the woman’s body as leaky vessel—at times grotesque, at others aroused. Why this obsession with fluids? 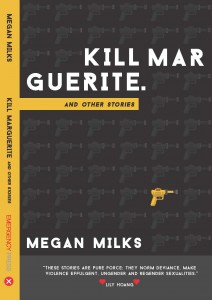 I’m obsessed with fluids because I’m obsessed with shame, and the body is often a site of great shame—while at the same time rejecting shame. There is something very threatening still about the grotesque leaky “feminine” body, especially as opposed to the closed, impenetrable “masculine” body. Many of the stories are interested in the transgressive, heroic properties of the grotesque female body. Others actually cut against the feminization of the grotesque. Some of the leaky (and penetrable) bodies are (hetero) masculine bodies—the figure of the father, for instance, gives birth, is impaled, etcetera, in a number of ways.