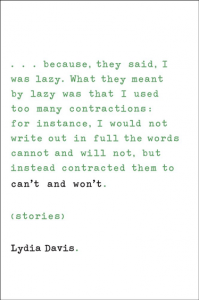 Before starting “Can’t and Won’t,” I knew Lydia Davis as the translator of Proust’s “Swann’s Way,” the first of seven volumes of notoriously dense French modernism. My associating her with such long-windedness is of note because it points out one of the many oddities of Davis as a writer and thinker: she is, to many, best known for her “flash fiction,” stories that are sometimes as brief as a single sentence. Her output is diverse, ranging from startlingly short pieces to epic translations. Her new collection is a bold, brilliant showcase of her sundry talents, its contents a mesmerizing array of largely disconnected stories, letters and translations.

Cumulatively, these heterogeneous storytelling techniques create an atmosphere of disorientation and absurdity, while the shortest pieces, like commas in a long, nonsensical sentence, provide an essential rhythm and structure. They are reminiscent of Tweets or Facebook updates in their brevity and mundanity—qualities for which such writing is often denigrated. By creating tiny stories that stick with you, demand rereading, and appear amid more conventional pieces, however, Davis challenges widely-held beliefs regarding the content, length and purpose of “highbrow” fiction. This is perhaps best illustrated with the title story, “Can’t and Won’t.” In it, Davis (or the narrator? Is there a difference?) reports that her writing has been criticized as “lazy.” Here, the criticism she refers to is of her tendency to use contractions, but we can easily translate this to a negative appraisal of the “micro” form more generally. This response—a piece of flash fiction that reports the accusation and, in so doing, repeats the offense—is simply brilliant.

Elsewhere, Davis is more straightforwardly playful (“Brief Incident in Short a, Long a, and Schwa” is a clever exercise in sound-play that demands to be read aloud) and sometimes borders on precious (“Judgment” involves a ladybug). The best very short pieces seem plucked from the middle of something else, simultaneously implying a context and refusing to provide one: “A Woman, Thirty” conveys a striking image of isolation and repression while denying us the satisfaction of an explanation. Similarly with the excerpts from Flaubert’s correspondence: we are kept unaware of both the surrounding material and the intended recipient. (Here again, by the way, Davis questions the definition of fiction by including someone else’s work—albeit her translation—in her collection.)

Davis also writes letters to explore modern consumer life (“Letter to a Frozen Peas Manufacturer”) and create psychological sketches (“The Letter to the Foundation”). Her fixation with the form of the letter points to a principle motif of the book: the many forms and failures of communication. The shortest pieces often read like notes to oneself; the Flaubert bits are from actual letters; the messages to businesses would certainly go unanswered if sent, and express far more than they purport. Twitter and Facebook have emerged in part because of a need we have to be heard in a constantly shifting world. Davis’ work expresses, affirms and lightly satirizes this need, and demands that attempts to meet it, however vapid or egotistic they might seem, be both taken seriously and questioned deeply. (Alexandra Houston)