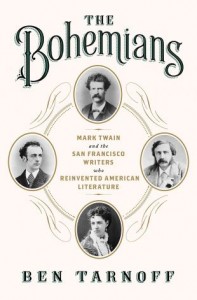 When Mark Twain arrived during the waning days of the Gold Rush, San Francisco may have been a frontier city on the rough edge of American life, but it was also fast becoming a literary town with a strong bohemian flavor.

For Twain, it was love at first sight: the Missourian was smitten by the city as soon as he set eyes on it. He loved its rowdy atmosphere, its unpredictability, the feeling that anything could happen here. Twain (still using his given name Samuel Clemens) arrived in San Francisco in 1863, while the Civil War was still raging. Although only twenty-seven, he had already lived a life full of adventure, from piloting steamboats on the mighty Mississippi to wandering through Missouri with Confederate guerrillas.

Twain is one of the four Bohemians in this compelling group portrait by writer Ben Tarnoff. Twain is the best known member by far, but the true leader of the faction, the true literary spokesman of bohemian San Francisco, was Bret Harte, a shy, soft-spoken dandy originally from Albany, New York. The other Bohemians were two now largely obscure figures, author and editor Charles Warren Stoddard and poet Ina Coolbrith.

These self-proclaimed Bohemians were nonconformists by choice, and by nature. They turned their back on what they perceived to be the Old World elitism of the East in favor of an irreverent and ironic style of writing. “The Bohemians would prove that the Pacific Coast could produce literature on a par with the Atlantic,” writes Tarnoff.

Coolbrith hosted literary salons in her San Francisco home atop Russian Hill for many years; she was, in fact, the West Coast version of Mabel Dodge, that literary doyen of Greenwich Village and later, Taos, New Mexico, fame. Born Josephine Smith (she was a niece of Mormon founder Joseph Smith), Coolbrith took her mother’s maiden name to distance herself from her Mormon past and to start over in San Francisco after an early marriage ended in failure.

Initially, the four Bohemians began writing for a newspaper called the “Golden Era.” It was here that Harte created a new persona, referring to himself as “the Bohemian.” To Harte, Coolbrith and Stoddard, those early years in San Francisco, says Tarnoff, were the best years of their lives while, for Twain, it was only the beginning in what would be a long and successful career.

Before long Harte started his own newspaper, a stylish publication called the “Californian.” Within its first year it had gained a reputation as the best literary paper in the Pacific. All four Bohemians were also involved in one way or another with the “Overland Monthly,” the West Coast equivalent of the “Atlantic Monthly.” Harte and Stoddard served as editors while Coolbrith acted as literary muse in her unofficial capacity as editor while also contributing poetry. Meanwhile, the lesser-known Stoddard gained a measure of fame himself when he boarded a schooner for Samoa and wrote about his South Seas adventures in the Atlantic.

But the Bohemian days in San Francisco were short-lived. By the late 1870s, the city had changed: its unemployment rate skyrocketed to twenty-five percent, while its literary fortunes experienced a steep decline. The “Overland Monthly” ceased publication entirely in 1875. Harte had left California a few years earlier, in 1871, no longer the Next Big Thing. He became instead, in the words of a contemporary journalist, an “old-young man” who went on the lecture circuit (which he hated) before settling in Europe, where he held various governmental posts. Stoddard left town in 1873. Coolbrith stayed on in California. She became the state’s poet laureate in 1919. Twain, of course, went on to write his best-selling novels and became the iconic figure that we know today.

But for a brief shining moment these four Bohemians burned brightly under the San Francisco sky where they wrote about and lived the lives of outcasts, underdogs, and fringe dwellers. Their use of vernacular and frontier humor, maintains Tarnoff, helped distance American literature from its origins in New England “toward the discovery of a vast, varied continent composed of countless local cultures.”

In fact, these four very different Bohemians “showed that great writing could grow anywhere…” even in a remote, ramshackle city on a hill on the far side of a still-young nation.