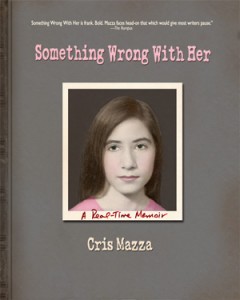 “Something Wrong with Her” is an arresting chronicle of the personal consequences of an artist’s sexual dysfunction, caused by a medical condition called a weak pelvic floor. The condition can be treated with physical therapy but in Mazza’s case it remained undiagnosed for decades, deepening the isolation of a gifted author trying to understand why she feels pain when others feel pleasure. That this happened during a sexual revolution of the 1970s and eighties only adds to her self-doubt.

Many narrative levels operate in the book. Striking journals of unhappy relations with men are grafted onto a memoir that is being critiqued by the author’s writing group. Arranged “like the barbs on an arrow” are quotes from Mazza’s numerous published stories and novels, her personal emails, dream logs and high-school yearbook inscriptions. The emails are with a tenor saxophonist friend addressed as “MarkR,” who has a lifelong crush on her. Both experience failed marriages while brooding on the past. Interspersed are useful mantras on creative writing, all this arranged as a jazz fake book, a loose-leaf that musicians used to carry to club dates and wedding gigs.

The effect is a bravado ride through feminism’s second wave when some unscrupulous men in authority could manipulate some uncertain young women. Nonfiction accounts of Mazza’s vivid fictional scenes of innuendo are offered, as she runs through a “chestful of raw emotions.” The book is written to MarkR as both pursue different career trajectories in the arts. Mazza now directs the University of Illinois Graduate Program for Writers and MarkR, Mark Rasmussen, is a retired California music educator who plays on an accompanying CD of three original jazz tunes. Some of the most moving scenes come from a college marching band both played in, and when Rasmussen later falsely claims to have composed a recorded tune to impress the girl of his dreams.

The writing group cautions Mazza the memoir is too long. With more than 170 journal and 160 email quote boxes, this book does repeat too much information. By the sixtieth or seventieth quotation from her work, or when Wikipedia is cited as a reference, readers may crave fresher insight into the role of art in life, along with more humor. At the same time, this brave bid for closure may be hugely helpful for a focused audience. Mazza’s chronicle of one woman’s path toward authority twists and turns like a good—albeit difficult—jazz solo. (Ted Anton)

Cris Mazza celebrates the release of Something Wrong with Her on April 12 at the Book Cellar, 4736-38 North Lincoln, at 7pm and will read with author Megan Milks on May 8 at Women & Children First, 5233 North Clark, at 7:30 pm.

“Something Wrong With Her: A Real-Time Memoir”
By Cris Mazza
Jaded Ibis Press, 390 pages, $18