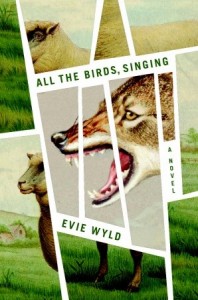 Evie Wyld’s second novel, “All the Birds, Singing” throbs with an undercurrent of violence. The first sentence describes a dead sheep, “vapors rising from her like a steamed pudding.” The protagonist bears a horribly scarred back, and she’s deeply afraid. Jake Whyte, “arm in a sling, looking like a lesbian or a hippy or something,” is not an especially likable character. She’s gruff, aggressive, unfriendly and frightened, but she’s strong and resourceful, too. Wyld tells her story forward and backward. Every other chapter is told from the perspective of either the older Jake or the younger. The older lives in England, on her own sheep farm. Her story is told forward. The younger Jake’s story is told in reverse. She works as a shearer in Australia. The structure might sound confusing but it’s quite easy to follow, although I did get a bit confused when her Australian mates referred to her as a “good bloke.” Apparently it’s a high compliment, even for a woman.

Wyld was named one of Granta’s 20 top British novelists recently, belying an unexpected maturity to her work. Wyld’s chapter featured in Granta’s compilation was by far the standout of the collection. Like the novel, it left the reader with a ferocious ache to know the rest of the story usually reserved for “Homeland” or “Game of Thrones.” The younger Jake is being chased by Otto, a man whose relationship to her is unclear. As her story moves backward, the reader slowly learns who this man is and why he’s following her. The older Jake is haunted by her past. She eschews any attempts from her neighbors at friendliness, mourns the death of her sheep, and generally gives the impression of the local madwoman. She attributes the death of her sheep to some mysterious being—whether human or animal or mythical is unknown. It’s all too real to her, but this woman seems too damaged to be reliable. Even though Jake is presumably out of danger, seas and continents away from her trouble in Australia, she’s grown even more intractable. A neighbor offers help around the farm, encourages her to go to town and visit the pub to get to know the locals. Finally she’s able to relax with an unlikely person—a drunk that literally stumbles onto her farm, someone that requires more assistance than he provides. For this woman who’s found it so difficult to let anyone close to her that she won’t even name her dog anything but Dog, it’s a huge step forward. Why she tolerates his presence is a bit unclear, except that he’s in slightly worse shape than her. In Wyld’s novel, animals’ lives mimic humans’—fragile, temporal and chaotic. The sheep are malleable, a confident hand is all it takes to cut off their fur or slit their throats. Jake is as watchful as a cat, often repeating a phrase, “The human eye senses movement before all else.” The birds, singing or shouting, match her mood from the first bloody sheep to this book’s unforgettable ending. (Kelly Roark)