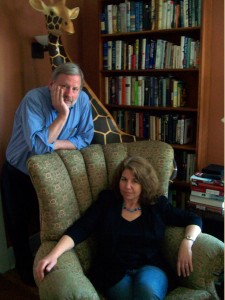 Nina Barrett has always followed her passions. After earning an English degree from Yale, she worked as an editorial assistant at St. Martin’s Press. She was then offered a leading position at the Literary Guild that required she read five to seven books a week, typically whatever was hitting the best-seller lists. After years spent studying nineteenth-century literature at Yale, the job experience provided Barrett with what she describes as an  “incredible grounding” in popular American literature.

Barrett came to Chicago in 1985 to attend the Medill School of Journalism at Northwestern University. She spent a year pursuing a culinary degree, a change of course that she’d intended to cap with opening a restaurant. Instead, she began working as a food reporter for WBEZ.  “The pull of words in me is strong,” Barrett says.

There’s possibly nothing that could prove this more than Barrett’s newest endeavor: Bookends & Beginnings, the independent bookstore she plans to open in Evanston in June, in the space formerly occupied by Bookman’s Alley. Barrett and I spoke recently about her plans for the store and the so-called independent book renaissance she finds so vital to our culture.

There’s certainly a renaissance of independent publishing and book-selling going on, but still, opening a bookstore now is not exactly considered a lucrative move. What’s at the heart of your decision to open an independent bookstore?
Nothing about my career has been driven by money. I believe in trying to make a living at something that you care deeply about. I miss the world that I grew up in, where [independent] bookstores existed. And not just where they existed, but how they defined the places in which they existed. I own books that I know exactly where I picked them up, and I know when in my life I read them, what I learned from them, what they meant to me. It’s tragic that we’ve created this world where places like that don’t exist.

Why Evanston?
I always thought Evanston was the perfect place for a funky, independent bookstore. There’s this confluence of forces where Borders is done, and people are kind of tired of the big-box book-buying experience. I think we’re at the same place with books as we are with food. We’ve realized that this mass-production mentality we have with books has destroyed what once made literature an enjoyable pursuit for those of us who care about it, in the same way that the mass production of food has destroyed the very taste of food for some of us. My husband and I talk about what we’re about to do [at Bookends & Beginnings] as “slow books.”

You’ll be selling new, used, and out-of-print books. What will people find at Bookends & Beginnings that they can’t find anywhere else?
We have to contend with the fact that Amazon has defined a world in which everyone wants to get a bargain on a book. I don’t think you can do business anymore with a stock of entirely new books and expect to get by. If you sell used books, you have access to a century of literature that isn’t in print anymore. We have several sources of really good used books.

Because of my long history in publishing, I know what to look for. And from my culinary experience, I know what cookbooks I want to bring in. For instance, I’ll be selling the entire series of Time-Life cookbooks, which existed in the late sixties and early seventies. They hired the best culinary experts from countries around the world and put together beautiful cookbooks that have not just recipes, but narrative chapters about how the food fits into the culture. I learned to cook from them.

There are certain kinds of children’s books that were influential in my childhood that I want to sell, like the Childhoods of Famous Americans Series, which are actually still in print, so we’ll have old and new editions.

What else will people find at your store?
The antiques were always a tradition at Bookman’s Alley. We liked the feeling that it created in the store. It felt very much like you were walking into the living room of an incredibly well-read person. It was homey. There were couches and chairs and antique lamps. It’s the spirit of the space. We hope to continue that. We’ve already acquired a working Victrola, some giant stuffed animals that I think were once part of some department store’s window display that will go in the children’s section.

Building community is a major part of the success of an independent bookstore. What sort of events will you be holding in your space?
I would really like to do some out-of-the-box readings. I’d love to host theater students, to engage people who are either writing or are in other arts in a sort of accountability group. I want to do events with people who seriously care about reading and literature and creating literary culture.