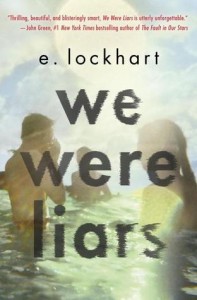 In “We Were Liars, ” Cadence Sinclair and her mother go to the Sinclair’s private island, just as they’ve been doing for years. Her mother’s sister, her grandfather, and her cousins converge on this private paradise, each family to their own manor house. The oldest cousins and a friend of the family, Gat, are best friends and are known as the Liars. The younger cousins are The Littles, not yet involved in the intrigue of teenagers. This summer is different from before because seventeen-year-old Cadence is recovering from a memory loss that occurred on the island two years ago. She woke up without her clothes, on the beach with a head-wound and no memory of what had happened. Since then she’s felt abandoned by her friends and at a loss with her stiff upper lip family.

Written by E. Lockhart, a Printz honoree and National Book Award finalist, “We Were Liars” is a young adult book that will appeal to both teenage and adult readers. Lockhart’s characters are thinly disguised figures from “King Lear.” Cadence’s mother and two aunts stand in as Lear’s daughters, squabbling over who has the largest beach house and which grandchild is likely to get the largest inheritance. Cadence’s grandfather is the King Lear figure, growing ever more senile and infirm. If reading about wealthy, white New Englanders isn’t your cup of tea, consider, at least, that it’s based on Shakespeare. Cadence’s propensity to refer to her mother as “Mummy” does grow tiresome. But her affaire de cœur with the unrelated Liar, Gat Patel, brings a much-needed balance to this story. Gat’s sense of social justice doesn’t allow the Sinclairs to forget that their carefree summer vacation rests on the shoulders of their tireless servants or that he, as the brown visitor, is never fully accepted by the patriarchal figure.

In addition to the “King Lear” reference, Lockhart pulls in the mythology of that magical number three, which so often appears in fairy tales. “Once upon a time there was a king who had three beautiful daughters. No, no, wait. Once upon a time there were three bears who lived in a wee house in the woods. Once upon a time there were three billy goats who lived near a bridge.” Cadence’s story leaks into the realm of the fairy tale as well, haunted by those lost memories. She’s transformed from the girl who had it all to the girl who lost it all. “I used to be blond, but now my hair is black. I used to be strong, but now I am weak. I used to be pretty, but now I look sick.” In an interesting technique, Lockhart actualizes Cadence’s feelings—when Gat casually mentions her dead grandmother, she writes “…my veins opened. My wrists split. I bled down my palms.” It’s like when Audrey Tautou literally turns into a puddle of water at the sight of the man she loves in Jean-Pierre Jeunet’s “Amelie.”

“We Were Liars,” which is already getting a lot of advance praise, really does live up to the hype, hovering around the realm of “un-put-downable.” Resolving the mystery of what happened to Cadence on the beach that night involves a twist that reminded this reviewer of Gillian Flynn’s “Gone Girl.” Teenage readers are about to have their minds blown. (Kelly Roark)