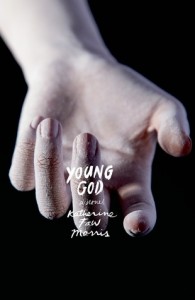 Regarding her brutal, minimalist masterpiece “Play It As It Lays,” Joan Didion has said that she wished “to write a novel so elliptical and fast that it would be over before you noticed it.” Many have mimicked this literary wind-knocking technique, but where others have produced accidental parodies, Katherine Faw Morris delivers a brass knuckled gut-punch with her debut novel “Young God,” a piece of pure, uncut psychobilly fiction. Writing with a narcotized numbness and rawboned brevity reminiscent of early Bret Easton Ellis, Morris follows the travails of Nikki, the most hardcore thirteen-year-old you’ll ever want to meet. After her mother’s death, she barely bats an eye before breaking into—and quickly dominating—the narcotics trade in her rural southern town, which is captained by her father.

This kind of bumpkins-behaving-badly premise might sound a tad familiar. Recently, America seems to have turned to backwaters, bayous, and trailer parks for entertainment fodder, gorging itself on books, shows, and movies spanning every strata of taste, from the high (“True Detective”), to the middle (“Hunger Games,” “District 9”), to the low (“Duck Dynasty”). But this is something different. Rather than merely riding the coattails of her best predecessors (or becoming borderline exploitative like the rest), Morris ups the ante. In her world, good is not pitted against evil. There’s not even moral ambiguity. Years of isolation, addiction and deprivation have obliterated bourgeois decency, and life is nasty, brutish and short unless you fight like hell for no one but yourself. Nikki is no Katniss Everdeen. She’s a new breed of heroine who reeks of authenticity.

Despite ample opportunity, “Young God” neither fetishizes nor romanticizes the rural poor. Morris, a native North Carolinian, has said her book is “emotionally, psychologically true, even if all the events are not,” which might in part account for the book’s evasion of traps and tropes. But its remarkable precision is the real key. Where another author would dwell on the toothlessness, ruthlessness and hopelessness of these people, wrapping them in familiar adjectives and thereby instructing us how to feel, Morris forces us to see them for ourselves. Often, she surrounds a single sentence with a full page of blank, white space, a canvas for us to draw out the nightmares she merely lets us glimpse.

In part because of this spareness, Nikki sometimes seems almost impossibly devoid of recognizable emotion. Morris counteracts this by occasionally and effectively letting us see the childish vulnerability at Nikki’s core: she criticizes and commends her body to herself in the bathroom (albeit while shooting up); she mimics the hair and makeup of other girls (albeit prostitutes); she’s not sure how to have sex for the first time (albeit with her mother’s former lover). She’s not the pure id of fantasy or farce, but a teenaged girl with no resources, nothing to lose, and no one who cares. And Morris does a damn good job making us sit up, notice her, and wonder how the hell we let her get there. (Alex Houston)

I love this review! Now I really want to read this book…