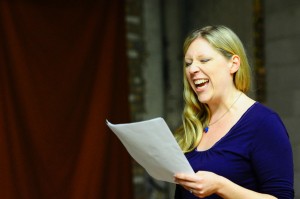 When Dana Norris founded Story Club five years ago, it was an open mic reading and she was “just trying to figure out how to do this thing.” In the years since then, Story Club has launched monthly shows on Chicago’s South Side, and in Minneapolis and Boston. In February, she introduced Story Club Magazine, an online journal that publishes stories performed at reading series in cities across the country.

Just before Story Club Magazine’s second issue went live in early May, I had the pleasure of talking with Dana about Story Club’s success, the struggle of translating performance stories for print, and Chicago’s dynamic storytelling scene.

Tell me about Story Club Magazine.
I’ve been running Story Club for five years, where we’ve had all of these performers going up on stage and just killing it. But sometimes readers would just vanish as soon as the show was over, and I wouldn’t get a chance to tell them how good they were. So, I started doing an audience vote at the end of every show so I could publicly reward their boldness. Winning’s nice, but I also wanted to reward performers by publishing their stories on the Story Club website. We did that for a couple of years, and then started the Story Club South Side show, then Story Club Minneapolis, Story Club Boston. I wanted to publish great stories from those shows and from shows around the country. I wanted a central resource for live lit in print, video and audio so you don’t have to be in the room when a performance is happening to reap the benefits of the story.

It gives the story a longer life, then. A home outside of the show.
Yes. Also, I used to be the manager of TriQuarterly Online. My experience there gave me a good sense of academic creative writing and how to run a magazine. I kept encouraging people who performed at Story Club to submit their work, because there are thousands of literary journals that are hungry for creative nonfiction. There isn’t a lot of overlap between publishing and performance, and a lot of performers didn’t feel comfortable translating their work for print. I wanted to create a magazine that specializes in this type of work, where the goal is to translate these pieces of performance to the page. It’s a new way for people to appreciate these writers, and for the writers to get published—because these writers are as good as the writers I see in any well-regarded literary magazine.

How are the curatorial decisions for a publication of performance pieces different than the decisions you made for a print publication like TriQuarterly?
A lot of the curating for TriQuarterly was based on solicitation. You would search for authors that you thought were amazing and ask them to send something. The process [for Story Club Magazine] is akin to that, except I’ll have a memory of an amazing piece that I saw, and I’ll approach the author to see if they’re interested in publishing that.

What is the editing process like?
It’s a process of translation. Many times, we’ll have audio of a performance, and it will be different from the print version that we receive [from the writer]. In that instance, we’ll put an editor’s note at the bottom to explain the deviations from the live version to the print version. I’m fine with that. Reading something with your eyes and listening to something with your ears are two different functions. I know in my own writing there are certain jokes that work great out loud that would never work on the page. So you just…adjust.

I’ve enjoyed and participated in Chicago’s story telling scene for a few years now, but I’m realizing I know very little about reading series and shows in other cities.
I didn’t either, before I started doing this. I literally Googled “storytelling, Columbus Ohio.” I began to discover story telling series that way, and I sent out a mass email introducing myself and Story Club, and asked them to send exemplary pieces from their shows.

You’ve been in the story telling scene  long enough to witness its citywide takeover. Now, one can easily catch some sort of literary reading every night of the week. What’s been the biggest change?
The quality of the stories has definitely improved. There are so many shows, and they’re all making each other up their game. When we were starting out, all of us—myself included—were just trying to figure out how to do this thing. When I started Story Club, I had an open mic. There were always a percentage of performers who didn’t really prepare, didn’t know what to do, and were just sort of going through with it. That doesn’t happen anymore. Now, every person that signs up for the open mic is prepared. They’ve rehearsed. They want to win the audience vote. They’re going for it.

What are your favorite shows in the city?
Well, I just had a baby, so I don’t do anything (laughs). I love Write Club. It’s the persuasive essay you had to write in high school, but it’s also a fierce debate. I also love Guts and Glory. The goal of that show is for the writer to say something that scares them, so you get really bare-boned essays from it. You learn something when you go to that show. I love Here’s the Story. It’s like a warm hug. It makes you feel good about humanity. I love This Much Is True. They do a really good job of reaching out to established storytellers who were telling stories before this live lit thing. And I love the Paper Machete. I LOVE the Paper Machete.