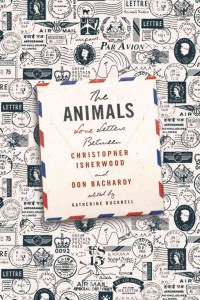 The most enlightening part of “The Animals” is the introduction. Without it, there would be simply no way to tell what letters Christopher Isherwood and Don Bachardy had exchanged in times of strife. Isherwood and Bachardy are among the most eminent of historic gay couples: right up there with Stein and Toklas. Isherwood—famous for writing the stories that formed the basis of “Cabaret!” and the novella “A Single Man”—spied a barely legal Bachardy, who would become a portrait sketcher to the stars, on Valentine’s Day in 1953.

“The Animals,” which collects a large sum of the letters the two sent each other, starts three years into their relationship, and soon the lover’s lexicon creeps in. The middle-aged Isherwood is Drubbin, an old wise horse perpetually one trot away from the glue factory, while the frisky young Bachardy plays a snow-white Kitten longing for Drub’s cuddles. As they transcribe their sweet nothings, their hands become paws or hooves, their domiciles baskets or stables.

Aside from each letter’s rather fulsome beginnings and endings, theirs is a pragmatic, chatty love of the day-to-day. It’s odd to discover that Bachardy and Isherwood have similar voices. Both are quick to cut down a boring dinner companion. There are digressions about unpaid bills or slow mail. Theirs is a world of rented apartments, trips to England and notable names: Cecil Beaton, W.H Auden, Glenn Ford. Each page is festooned with footnotes, clarifying the casual mentions of members of society and intelligentsia who suffer from varying degrees of historical obscurity. The letters span the mid fifties and the entire sixties, stopping abruptly mid 1970. Editor Katherine Bucknell explains that at this point, Bachardy and Isherwood made a point to strengthen their relationship by spending little time apart.

The success of “The Animals” depends on taking all the cute professions of fealty and desired canoodling at face value. Then it’s an adorable show of commitment that may inspire some snuggling—or unfolding of old love letters where the object was to include all the astronomy metaphors possible, like lovers do. The fact that the book archives a sixties gay relationship seems rather irrelevant, as sexuality plays little role in what’s written and it’s not particularly queer to give your beloved a pet name. There’s neither juice nor dirt—it’s not as if it’s obvious when one of the Animals is sleeping with a different companion. The people they knew are for the most part people we don’t know. Nor are there poetically heart-rending sentiments of how important one soul finds another in a storm-tossed sea. Just some occasional mild entertainment a scholar could enjoy.

One might expect a writer of Isherwood’s distinctive autobiographic style to carry the same voice into his letters, but alas. The letters are somewhat surprisingly indistinguishable from anyone else’s missives, right down to the paper Lolcats. Maybe at the time, this was all transgressive. But even then, Isherwood and Bachardy probably didn’t think so. They just wrote to make each other happy. (Liz Baudler)