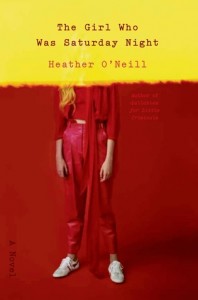 “The Girl Who Was Saturday Night,” the second novel by Heather O’Neill, follows two years in the life of Nouschka Tremblay. Nouschka and her fraternal twin brother Nicolas grew up as child stars. The product of a night between the irresponsible Quebecois singer Etienne Tremblay, who only raises them when the cameras are running, and a fourteen-year-old groupie, whose only contribution to their upbringing was leaving them on their grandfather’s doorstep, the Tremblay twins’ childhood in the limelight has left them extremely damaged people.

The novel begins when the twins are nineteen and inappropriately attached to one other; they still share the same bed. Nicolas is a petty thief and already a deadbeat dad. Nouschka is an accidental beauty queen who finds herself in the middle of numerous affairs, the next of which might be with Raphael Lemiux, a mentally unstable criminal and former figure skating champion.

“The Girl Who Was Saturday Night” is chiefly about fame. The Tremblays spend the novel dodging the narratives of paparazzi and documentary filmmakers; when Nouschka’s relationship with Raphael flourishes, she vows to “lead a well-adjusted, serene life” to overcome everyone’s expectations for their failure. However, the largest narrative with which they must contend is the one of their supposedly happy childhood in the limelight, when the reality is that it was mostly spent in the squalor of their grandfather’s apartment. As Nouschka says of the reaction of one character to she and Nicolas: “Of course she loved our persona. It was designed to be loved.”

O’Neill knows when she should be subtle; she’s able to handle a major character revelation in such a way that a reader knows exactly what is suggested without ever having to spell it out. And though Nouschka has many explanations for why characters around her make terrible mistakes, O’Neill makes sure Nouschka doesn’t always know the reasons why she does the foolish things she does and the novel is made the better for it. (Brendan Tynan Buck)

“The Girl Who Was Saturday Night”
By Heather O’Neill
Farrar, Straus, and Giroux, 416 pages, $26