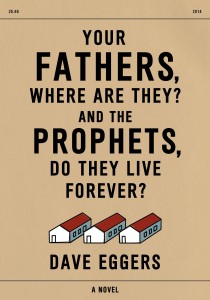 Book by book, Dave Eggers has pushed the limit of what he has done before, and then takes one step further. His latest novel may look slim, but it represents another startling leap into new territory.

Here is a tale as tightly wound as an alarm clock. Told entirely in dialogue, it takes place on a deserted military base on the California coast. Thomas, its hero, has kidnapped an astronaut, Kev, and chained him to a post. “I’m a moral man and a principled man,” Thomas assures him.

It’s usually a bad sign when a hostage-taker makes such assertions. It may not be so here. Thomas merely wants to ask Kev a few questions about his past, but then he gets another idea. He grabs another hostage. This victim is a congressman, a double-amputee war veteran who wakes up groggy on the floor. He is kinder to Thomas than Kev, more understanding. He knows this will not end well for Thomas, and pities him: “You’ve got a head full of rocks, kid. And there are a hundred thousand others like you in the desert right now.”

On it goes. Thomas begins conversations and then cuts them short, rushing off for another hostage. He grabs an elementary school teacher; he abducts his own mother. He subdues and kidnaps a police officer.

In the past five years, Eggers has begun writing screenplays and “Your Fathers” yokes the economies of that work—its reliance on dramatic thrust and human speech—to novelistic purpose here. Toggling between his captives, Thomas assembles a kind of explanation for why, as he sees it, the world has forsaken him: it has vacuumed his generation’s sky free of dreams and replaced it with satellites, or “space kites,” as Thomas calls the International Space Station.

The book would read as a screenplay in novel form were it not for the richly patterned quality of its language. Conversations become interrogations, and when Thomas’ quarry lies he pounces on the eliding quality of their speech.“That’s not a word,” Thomas shouts at the teacher when the man uses the word “irregardless.” “You should know that. You’re a teacher.”

A friend of Thomas, it emerges in conversation, was shot by police officers. He wants to know why. He nabs a woman from the hospital where his friend was taken.

Thomas is in his thirties, but he betrays none of his generation’s supposed quest to demolish authority. He simply wants to remind those who possess it that power comes with responsibility. He begins losing this argument with his sixty-two-year-old mother. Thomas browbeats her about his childhood, her drinking, her taste in men. “You want to blame me for everything,” she retorts, “fine, but you were always a certain way.”

On it goes, soaring on updrafts of hope and descending on vectors of recrimination. In previous books, from the National Book Award finalist “A Hologram for the King,” to “Zeitoun,” Eggers has written primarily about decent people. Thomas is perhaps decent, but he is definitely mentally unstable. Eggers has always been an elastic writer, but in “Your Fathers” he puts his language to the ultimate test. Thomas’ tone yaws from sincerity to creepy insinuation, capturing the abrupt shifts and feedback loops of delirium.

Happily, however, Eggers never pushes his young hero over the edge. Thomas has done something at best ill-advised, at worse criminal. Thomas merely wants what we all want: an accounting. In this gripping and saddening book, Dave Eggers has shown what happens when young men like him don’t get answers. (John Freeman)