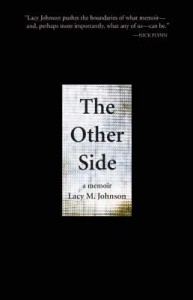 Lacy M. Johnson’s new memoir “The Other Side” tragically details her experience of getting kidnapped and raped by her former boyfriend. Nothing about this is necessarily strange—Johnson isn’t the first to write a memoir in order to render a personal trauma. What is strange about “The Other Side” is that despite its difficult subject matter, it is pleasurable to read. Johnson isn’t a victim of a crime who has become a writer in order to work through the physiological repercussions of that crime, but rather, she is a writer first and has the powers to render these events in a virtuosic prose that is simultaneously horrifying and admirable.

The book opens just as Johnson is escaping a soundproof room where she was raped and slated to be murdered. From there Johnson’s narrative is in constant nonlinear motion, racing back and forth between self-confessed naiveté and hard-fought empowerment. Although most of what is contained in “The Other Side” is reflected off of the crime at its center, Johnson is smart enough to use this horrific event to reach for higher truths and new epiphanies. What her audience is left with is a powerful, but often quiet, meditation on memory as it pertains to the physical body.

At times, the quality of Johnson’s prose acts as an emotional barrier for the reader who, while enjoying her capabilities, still has to squirm through the chapters telling us of a young, intelligent and talented woman who stays in a dangerous relationship. “The Other Side” is an intriguing read, but this is not to say that it is an easy one, and Johnson isn’t really interested in letting the reader off the hook in this regard. The descriptions are vivid and the victim is, of course, real. But throughout “The Other Side” Johnson’s choices are literary rather than cathartic and by the end of the book, we can only conclude that the two are one and the same. Johnson survives this experience, and the result of her years of reflection and gained insight is a well-crafted memoir that will make her a notable figure in her chosen genre. (Michael Benjamin Anderson)