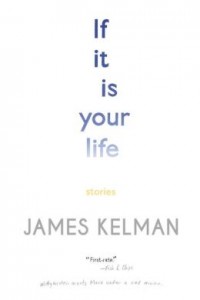 A few years back, The Guardian attempted to interview the Scottish Booker Prize winner James Kelman about his then-new novel “Kieron Smith, Boy.” The result was essentially an interrogative monologue by the interviewer, interspersed with Kelman’s “monosyllabic replies” and silences that were “long and Pinteresque.” Unfortunate for the interviewer, yes, but also no real surprise given Kelman’s writing, which dwells on the gaps between spoken words and the tangles of thought beneath them. As a character in his brilliant (if bleak) new collection “If it is your life” puts it, “Human beings are near the surface. Just scratch and that is us.”

Kelman’s work is all about this scratching, laying bare the inner lives of men and women in the margins as they have a pint or die alone or watch children build a raft to sail across a lake of detritus in the backcourt of a Glasgow tenement. His stories drop readers into the murky minds of working-class, often nameless, largely Glaswegian narrators who are plagued by intractable troubles that they cannot effectively convey to themselves or others.

By way of what might be called stream-of-brogueishness narration (keep the Internet handy for the Scottish slang), however, Kelman brings to light that which otherwise finds no exit to exteriority. At times, he does this with some humor as, in the rabbit hole of thought, his characters pause to ponder a common word or phrase that suddenly appears alien or without meaning. (“What happens now?” one character asks himself, and then continues: “what does ‘what’ mean?”) More frequently, though, a character will, when given the chance to speak at last, find himself unable: “She was always so cool, so calm,” the newly unemployed narrator of “talking about my wife” thinks of his spouse, with whom he’s spent a tense morning, “but I could never have told her that, never.” Or, in the titular story, a troubled man with a recently amputated leg is asked,“What’s up?” to which he responds “Aw nothing. Just life. Always something.”

The same, indeed, might be said of what goes on in Kelman’s ostensibly plotless stories. “Nothing” really happens except, of course, for life itself, in all its banality, confusion and dark beauty. So why should one read this book, if it highlights the two things we try hardest not to think about: the mundane and the wretched? No reason, really, except that Kelman is the heir of Beckett, if we’re talking about the way language crumbles and then reassembles itself in his hands, or the brother of Denis Johnson, if we’re speaking of his peculiar knack for occupying the minds of gutter-dwellers and self-destroyers, for whom the world is a midden heap ruled by bad gaffers, where one can’t go on but one must. This stuff is bloody brutal, and absolutely perfect. (Alex Houston)