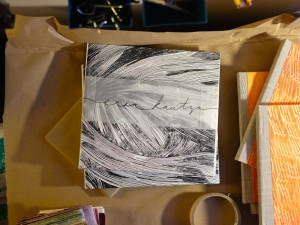 When a copy of Erin Kautza’s “Muscles Involved” came across my desk at Newcity, I was immediately enamored with it. It’s an accordion book that unfolds into an approximately seventeen-foot-long page. On one side is Kautza’s poetry—lilting lines that are both brutal and gorgeous; on the other, an illustration resembling one long leg of ropy, knotted muscle. Enclosed with the book was a thick business card, printed on a letterpress, that read: Meekling Press.

Meekling Press was founded in 2012 by Rebecca Elliott, John Wilmes and Lori Orillo, who all met while pursuing MFAs in creative writing at the School of the Art Institute. Their projects present narrative in the most fitting form, allowing the nature of the work to determine the way it is consumed. Each of their projects is printed on a letterpress, cut and folded and bound by hand, produced in very limited editions. The result is an experience that convinces the reader the work could be experienced no other way.

One recent summer evening, I met Wilmes (an occasional Newcity contributor) and Elliott at the Meekling Press studio, located in the apartment Elliott shares with her boyfriend in Lincoln Park. 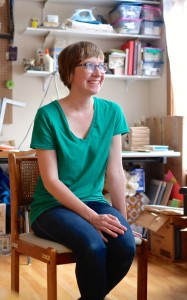 How did Meekling Press begin?

JM: This might be really corny, but we’re very nervous people. In grad school at SAIC, we were surrounded by all of these people who weren’t as nervous, and they had a lot more success outside of the school […] in terms of getting stuff published, making connections with other people and other presses, other distributors, stuff like that. We decided to do our own thing so we didn’t have to worry about making those kinds of connections. We wanted to be a small press, do small runs, because we had very particular ideas for each project.

RE: I was taking artist book classes and letterpress classes and was having fun with that. We were also trying to think about the way publishing is traditionally run. The power structures feel very strange and uneven. I think they’re changing, which is exciting to me, but I like being able to say we can publish our own things if we want to. One of the first books we did was John’s.

RE: It’s twelve, and they’re all cards. We printed them on this letterpress, which is a three-by-five [inch printing area], so I had to print each page twice—one half of the page, and then the other.

Rebecca, where did the intersection between writing and visual art begin for you?

RE: I was starting to think about the different types of narrative—lyric essays, hybrid works. I started thinking about narrative in terms of book form, and how that can affect the way you read. I chose an accordion book for [“Muscles Involved”] because her poetry like, rumbles down the pages. You can have all of them, if you wanted to. You could extend the whole thing out and have this continuous thing. 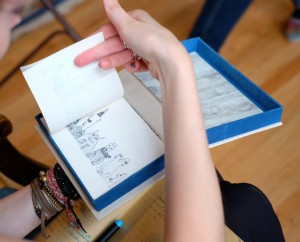 You can do all kinds of things! You can have books within books, narratives within narratives. This winter, we worked on a poem that has all of these different layers, so we’re going to print it on vellum so that as you turn the pages, the lines fade in and out.

And the books are all made in limited editions.

JW: One lesson we learned is not to listen to people in publishing in terms of how many to print. We were told, “Don’t do more than thirty, ’cause nobody will want them.”

RE: We did what, twenty-five or thirty of our first book?

JW: We sold them all right away.

RE: I will say that it’s hard to do a big edition, because you want to put a lot of work into each of them. You don’t want to spend forever binding it before moving on to the next step.

It seems to me that there are so many decisions to make between the acquisition of a new project and completing it, that are unique to what you are trying to do as a press. What is that process like? 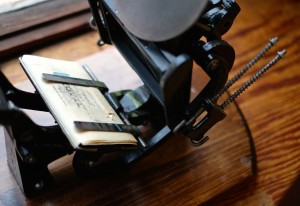 RE: So far, we’ve solicited stuff from people whose work we really like. Usually I read it, and I’ll know what the book should look like, the form. Or, you can develop the text and the book at the same time. I’m not sure what the best process is; I think we’re still figuring it out. I’ve really enjoyed collaborating with people on the design.

JW: I think trust is a big factor when there’s that much collaboration. It’s difficult to find people that you know you’re going to click with.

What happens after design has been developed?

JW: I think the most important part of the collaboration is making compromises as it goes along and as you find out what’s impossible. Sometimes we can’t do that thing we really want to do.

RE: Yeah, because first we’re like, “Oooh, let’s do this big, awesome thing that’s going to cost a lot and take five years!”

Tell me about this e-book floppy disk project. 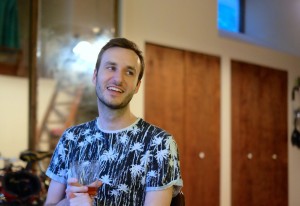 JW: The work is on the floppy disk. I think it’s cool because you actually have to go through the work of finding a computer that takes them. That’s part of the project. I think most people buy them for the novelty.

RE: We thought it would be funny.

JW: Old people love them. Not everybody thinks it’s funny.

A sort of history of technology.

JW: Yeah. A lot of musicians are recording on cassettes now, which I think is a cool thing. There’s no reason you can’t do cool things like that with literature.