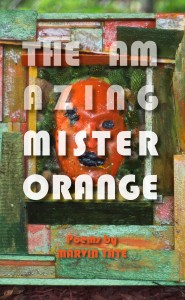 Any project Marvin Tate undertakes is just a sliver of the performer’s multimedia career—he’s been one of the funky minds behind the band D-Settlement, performance poet and all-around mixer-upper. That said, a sliver of Tate bursts with rhythm and spice, and his slim volume of poems, “The Amazing Mister Orange,” channels and chronicles the down-on-their-luck, the temporarily mighty going for a fall, with zingy grace and tempo. We chatted over email about the book’s genesis and style.

Who was “Mister Orange”?
Mister Orange is/was a name I once called my good friend Ainsworth Roswell, an amazing performance artist who taught me how to be in touch with the freak in thee. His favorite color was orange, he was Jamaican by way of England and so he had this incredible accent  that blew MF’s away. He would put on these underground shows in Post Wicker Park in dank basements, BDSM clubs and on street corners. He ended up committing suicide by jumping from the seventh floor of the Water Tower Place and landing in the food court. I bet he was making a statement; he was always interested in class, weed and race.

Were the poems meant to be performed or for the page?
I tried my best to make it for the page but being a performer, they always can have a second life, via song or perhaps short stories.

What speaks to you about narrative poetry?
As a performer, singing narrative-type songs (character-driven), my task was always to blur the lines between audience and performer thus creating an interactive performance—something I learned from my theater days and wanting to be a punk when I was younger. You know, being confrontational—got slapped a few times by audience members, added to the song’s backstory.

Who are some creators, contemporary or not, that you admire?
When writing this book, I got turned on to the performance poet Ivor Cutler, self-deprecating minimalists, the poet Stephen Dobyns—dude is deep—and then there are always my good-old standbys that I read and listen to whenever I need some instant inspiration, e.g., Amiri Baraka, obscure doo-wop and gospel (the haunted kind), Adrienne Rich and my mother-in-law, Lisel Mueller.

For you, what do the characters of your poems have in common?
They are all outsiders, vignettes in the moment, and snippets of a much broader picture. You’ll have to buy the book to see what I mean. (Liz Baudler)