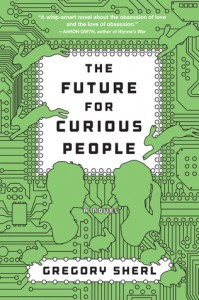 “The Future for Curious People, ” writer and poet Gregory Sherl’s debut novel, seems tailor made to be adapted into Hollywood romantic comedy, though one with a science fiction bent. One of its alternating narrators, Godfrey Burkes, begins the novel proposing to his current girlfriend Madge, who doesn’t quite say yes or no, her response contingent on a trip to the office of Doctor Chin, a specialist in envisioning, a process that allows a sight into the future. (Romantic futures are the only ones that can be viewed legally.)  Our other narrator, Evelyn Shriner, has just broken up with her boyfriend Adrian after a dismal visit with the same doctor, unsatisfied with their Chihuahua-filled future. Unsatisfied with all the futures she’s seen, Evelyn’s a repeat visitor to Chin’s office. But from the moment that Evelyn rummages through her purse for her ID, handing things to Godfrey in the process and prompting him to tell us “she’s completely beautiful—unruly hair, deep brown eyes, skin the color of the sun, and those pretty lips clamped down around a few flimsy scraps of her identity,” it’s pretty clear who is going to end up with whom. The only question is how, which is answered through suggestive envisioning sessions, comical misunderstandings and the requisite large romantic gesture.

That description might be a tad dismissive, but I actually had fun with “The Future for Curious People.” It’s a funny novel with a cast of likable characters. Evelyn, to cite an example, is the sort of public library employee who has taken it as her personal project to record audio books of classic works, except with happy endings, like one where Gatsby doesn’t die and instead goes boar hunting with Mr. Wilson and Nick. Or take her roommate Dot, a sullen kleptomaniac whose idea of teaching Evelyn how to swim is having her paddle on a board in a park during the Baltimore winter. The envisioning centers themselves are portrayed as sketchy places that were the former inhabitants of Chinese takeout diners and are littered with disclaimers such as “Look, if your pet is dead, it’s dead.”

It’s also not a novel that’s entirely without weight either, most of which comes from the central conceit, envisioning. The exact mechanics behind the tech, outside of taking a pill and looking at a screen, are left deliberately vague, so it’s essentially plot magic, but it’s plot magic that serves several metaphorical layers of the book. Evelyn, to put it bluntly, is an envisioning addict obsessed with the what-if, running to Doctor Chin with every name she can. As she endlessly dwells on and tries to rewrite her future, one can’t help but feel like she is trying to pull a Gatsby and rewrite the past, which includes, before her own birth, the death of a sister that sent her parent’s marriage spiraling. (Evelyn views herself as a replacement that didn’t quite do the job.) Of course, envisioning also has comedic layers, as envisioning sessions can be whacky and weird, complete with completely bizarre images and commercial breaks for Russian mail order brides.

That said, as fun and interesting as the novel is, it does have problems. Aside from the rom-com plotting, the novel’s latter half has a problem of being a little too Godfrey-centric. It’s not that Godfrey is uninteresting; though not as complex as Evelyn he still has charming character quirks. It’s the fact that conflicts are largely born of decisions that Godfrey makes, that tension is formed on anxieties that he has, and both are largely solved by actions that Godfrey takes to the expense of Evelyn’s agency, as primarily seen through a lost cell-phone plot. I also find it troubling that Sherl goes out of his way to determine that Godfrey’s pursuit of Evelyn while still with Madge isn’t cheating, or at the very least tries to pardon him for it through Madge’s behavior. Sure, Godfrey makes a good argument for himself when he asserts that Madge isn’t his fiancée, but she was most certainly his girlfriend, which makes Sherl’s attempt to downplay the infidelity’s gravity a little unseemly.

So ultimately I’m mixed on “The Future for Curious People.” It’s funny, interesting, and occasionally powerful, but it’s also unbalanced, biased and predictable. I’ll be curious to see what Sherl will do in the future, but any recommendations for his present work come with an asterisk. (Brendan Buck)

No review is complete without mentioning that Gregory Sherl has been accused of abusing women. If you’re going to enjoy this book, you probably have to come to terms with the fact that you may value “literature” over the well being of real women.