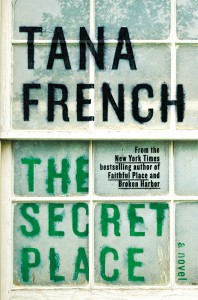 Tana French is finally back with the fifth book of the Dublin Murder Squad mysteries with “The Secret Place.” Her ingenious conceit continues, in which a minor character from a previous book becomes the lead character in the next—so in “The Secret Place, ” the point of view is from Stephen Moran, a rookie cop from “Faithful Place.” Stephen is approached by Holly—the daughter of another detective on the squad. Part of the fun of French’s books is that an inscrutable minor character is opened up in a future book, completely changing the reader’s perspective.

Holly’s dad, Frank, went from hard-nosed prick in “The Likeness” to tough-guy-with-heart-of-gold in “Faithful Place.” Holly tells Stephen that she found a note in the “secret place”—a board at her school where girls are invited to pin up secrets, a place to release emotions but also a place carefully guarded by the faculty. Holly attends St. Kilda’s, a posh private girls’ school where a boy from the nearby private boy’s school was found killed one year ago. Holly’s note reads “I know who killed him.”

Stephen works cold cases, and is itching to move up the ladder to the Murder Squad. “Murder is the thoroughbred stable. Murder is a shine and a dazzle, a smooth ripple like honed muscle, take your breath away. Murder is a brand on your arm, like an elite army unit’s, like a gladiator’s, saying, for all your life: One of Us. The finest.” Stephen convinces the lead detective of the unsolved murder to include him, with an eye toward promotion after a successful close. Antoinette Conway—just Conway, thank you very much—is prickly from the boy’s unsolved murder and being the much-maligned only woman in Murder. She’s not the partner Stephen’s been dreaming about, but the two fall into a rhythm when they return to the scene of the crime. Conway seems poised as the most likely lead in a future Tana French novel, so we may learn more about her backstory soon.

French, who has made no secret of her admiration of Donna Tartt and, particularly, “The Secret History,” is clearly referencing some aspects of that cult favorite. Holly and her three best friends are bright, loyal, so close they seem to communicate without speaking. Just like Tartt’s prep-school students in their tight little group, it’s hard to believe one of them might be a murderer. The more likely culprits seems like the St. Kilda’s mean girls, the antithesis of Holly’s pals, hilariously nicknamed “Daleks.” Lead by Joanne, who speaks in uptalk (On Conway: “OhmyGod, her attitude? It’s like, hello, just because you managed to save up for one suit that isn’t from Penney’s, it doesn’t actually make you queen of the world?”), the Daleks build their cachet on fear. But Holly and her friends are wise or brave or secure enough to stop being afraid. French taps into the inner workings of teenage girls with keen insight. “Be scared you’re fat, be scared your boobs are too big and be scared they’re too small. Be scared to walk on your own, specially anywhere quiet enough that you can hear yourself think. Be scared of wearing the wrong stuff, saying the wrong thing, having a stupid laugh, being uncool. Be scared of guys not fancying you; be scared of guys.” As usual, French’s novel moves beyond the mystery genre with her compelling story of teenage lives—the secrets they share, the ones they keep, and the secret places they create with each other.  (Kelly Roark)