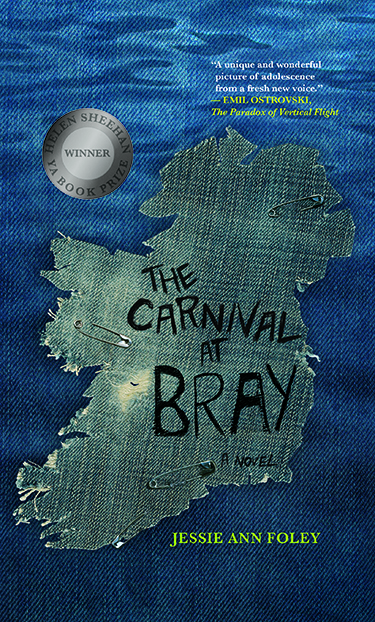 “There will be time to do the responsible thing.” Those words will echo with readers long after they finish “The Carnival at Bray, ” the debut novel by local writer and English teacher Jessie Ann Foley. The responsible thing: sixteen-year-old Maggie Lynch—a Chicagoan transplanted via her mom’s whirlwind remarriage to a man from the windy shores of Ireland—just going to school. Not going to the Nirvana concert in Rome, like her Uncle Kevin wants her to. Especially not with the boy she just met, Eoin, who can hold her so close when they dance. It’s 1994, before cell phones and Facebook, and everything is possible.

So there’s romance and music, staples of YA fiction. Dysfunctional family complete with bartender single mother and rock star uncle who’ve never really grown up? Check. Protagonist transported to strange and unfamiliar place and not entirely sure she likes it? Yep. But the specificity of place, whether it’s Chicago, Ireland, or Italy, carry this book to places far beyond the expected. The curls of ham on a pizza, the smell of goat pee in the morning, a nun’s wimple taking on the exact shape of cabbage—these moments spring off the page. Even the minor characters of Bray, Ireland, are sketched with fondness, as Maggie makes friends with a wily ninety-nine-year-old farmer and confidences in a scholarly yet steadfast English teacher nun. And for all the implausibility of the escape Maggie plans to undertake, there’s the endless plausibility of the working-class Chicago family dynamic, full of contradiction and throbbing expectation, that drives her to Rome.

It’s clear that Foley not only paid attention to language, but the message she wants to impart. She has confidence her older teen readers can deal with sudden death and morally murky sex, and even classic literature. Maggie’s Uncle Kevin leaves her with various lists of books: Excellent Books With Excellent Sex Scenes, Essential Reads, and names like that are just begging for a trip to the library. During the course of her time in Ireland, Maggie reads “On The Road” and “Lady Chatterley’s Lover.” Coupled with a little grunge, those two books nicely complement the story of an average Chicago girl deepening into a passionate, adventurous one. Sweet is the wrong word for “The Carnival at Bray,” but tender works just fine. (Liz Baudler)