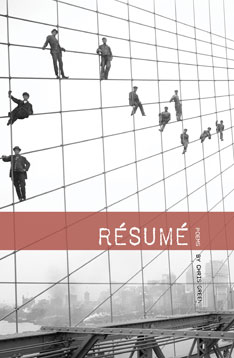 With the holiday season already in full swing, “A Christmas Carol, ” Charles Dickens’ yuletide story about surly old skinflint Ebenezer Scrooge, will once again be brought to life on stage and in countless TV movie adaptations. Yet most workers, in the wake of the Great Recession, can’t help but identity with Bob Cratchit, literature’s most put-upon worker. Given the devastation of both the national economy and the global economy, having a job and keeping a job, any job, has prompted many individuals to re-evaluate not only their work life but the very meaning of work itself. Creative writing has always provided fertile ground for such inquiries: fiction (“The Jungle,” “The Grapes of Wrath”), plays (“Death of a Salesman,” “Glengarry Glen Ross”) and the ragtag poetry of Charles Bukowski, Frank O’Hara and others, question our capitalistic system, the Scrooges who run it, and the value of what all workers do each day to earn a buck.

“Résumé,” Chicago poet Chris Green’s latest collection, takes readers on a contemplative journey through his hardscrabble employment history, which includes stints as a janitor, landscaper, adjunct poetry instructor, security guard and other wage-slave positions. The poems that comprise this slender collection explore the highs (such as they are) and plumb the depths of the catch-as-catch-can world of unskilled labor. Green’s speaker acts as a gadfly passing through one terse, uncluttered poem after another. Whether killing time reading poems by John Ashbery while working as an assistant to a pimp or turning a blind eye when two amorous students in the poetry course he is teaching begin making out in the back of the classroom, Green invites readers to visualize themselves in his various gigs, to balance the inherent dignity of all work with the reality that brains and opportunity, given the vagaries of the twenty-first century work force, are not enough to guarantee stable employment or personal fulfillment.

Green’s poems concern themselves less with the instability of the current job market than the worth and purpose of work itself. Few workers are capable of separating themselves from their jobs in order to question why, when their most basic needs are being met, they go on working. Powered, as most labors in the West are, by a capitalistic imperative to earn and spend as much as possible, Green mines the hurly-burly of his job history and the actions of the cadre of individuals he encounters along the way to dissect the world of work, its effect on personal relationships and the individual’s relationship to himself. In the first of two poems in the collection titled “Jobless,” Green’s speaker attires himself as a corporate drone, much to his young daughter’s bemusement and his own sense of failure, recognizing the uneasy tension all artists experience when lodged between servicing their art and lining their wallets: “I want poetry./I want to appear as a hawk,/symbol to hang in the sky, not day’s failure or success.” Crafted with a matter-of-fact eye, uncomplicated diction, straightforward phrasing and technical proficiency, Green’s poems equalize all workers who quest for a meaning greater than the jobs work, from the rich Scrooges too cheap to buy extra bread to the legions of Bob Cratchits begging for a meager lump of coal. (Jarrett Neal)