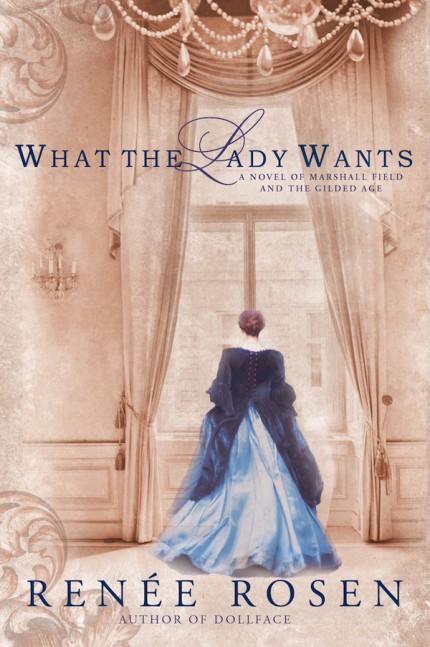 Marshall Field: business titan, leading citizen of a growing prairie city, terrible luck in love.  Wedded to a demanding, shrewish social climber, he suffers quietly along in marriage, and on the eve of the great Chicago fire, lays eyes upon one teenage Delia Spencer. There’s instant connection. The blaze is encroaching but it’s no match for the sparks between Field and the young girl.

This is how local author Renée Rosen imagines Marshall Field and his young mistress Delia beginning their decades-long affair. Rosen specializes in picking intriguing characters out of Chicago history and inserting them into her own narrative. Her debut adult novel, “Dollface,” saw her explore the city’s gangland days through a gutsy female narrator, and she’s at it again in “What the Lady Wants.” In Field and Spencer, Rosen works with real-life main characters this time, which is no detriment to either the plot or the characters themselves. In an appendix, Rosen explains that while Field’s life is quite documented, the characters around him are not. She carved out a rich slice of Chicago’s past—the Fire, the Haymarket Bombing, the 1893 World’s Fair—and takes great liberty to fill in the motives behind her characters’ private lives.

Readers won’t mind the wholesale inventions, partly because they keep the story going, but mostly because Rosen has an innate grasp of human relationships. She is skilled at sketching the little vicious cliques of women who judge Delia for adultery, and details the push and pull of the illicit affair itself in a way that feels compassionate toward everyone. Following the tangled strings of Delia, her husband Arthur and the Fields will grip those with complicated love lives of their own. Like Vera, the narrator of Rosen’s “Dollface,” Delia is a woman who bucks convention, associates herself with powerful men, and slowly realizes that she is her own greatest advocate.

If “What the Lady Wants” seems a tad escapist, so be it. It’s escapism crafted with care and research. Rosen has found her niche, and if she can keep the magic going, audiences even beyond Chicago will fall in love with her women and their city. (Liz Baudler)