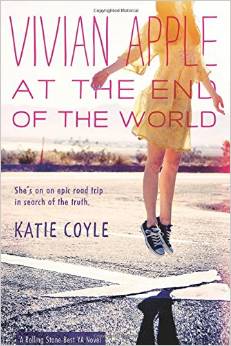 When Vivian Apple goes home after a Rapture’s Eve party, she finds two holes in the ceiling of her parents’ room, as if they were yanked out of this mortal coil, much like Bugs Bunny running straight through a door. “Vivian Apple at the End of the World” is yet another apocalyptic tale, but offers a fresh spin in this popular genre.

Vivian’s parents were “Believers,” followers of Pastor Frick, who predicted the Rapture. About 3,000 people disappeared on the predicted night. Vivian’s parents tried to convert her, but despite being the model daughter, she never believed in the teaching of the Church of America. “Believers” and the rest of the left behind assume that quickly following the Rapture of the most faithful, society will fall apart and the world will end. Amid the chaos and confusion as society does start to crumble, Vivian has the wits to follow her instinct and investigate what might have happened. She begins a cross-country road trip with her best friend, Harp, and a boy she met at the Rapture’s Eve party, Peter. Vivian and Harp’s friendship is the kind that inspires readers. Theirs is a fierce loyalty, the kind where one seventeen year-old can say to another, “I don’t want to be meek anymore. I want to be unstoppable.” The kind where they jump in the car and drive moments after the suggestion of the journey is made.

Author Katie Coyle, at the tender age of twenty-seven, won the Young Writers Prize award for this first novel, which was subsequently published in Britain under the title, “Vivian Versus the Apocalypse” and is now making its debut in the United States. Coyle has a keen ear for satire, and skewers the fundamentalist church for their treatment of women and reliance on capitalism and consumerism. The Church of America’s reach is far, with multiple products for all your pre- or post-Rapture needs: “SPRING into the eternal kingdom in this sweet pale gold romper! Only $145 on the Church of America website!”

Coyle’s book is practically a primer to teach teenage girls bravery and independence. In the face of a quickly changing society, Vivian has the strength of mind to question the conservative masses. When she finds the adults in her life incapable of helping or protecting her, she walks out the door and picks up a damn sledgehammer on the way. That sledgehammer is a literal and metaphorical weapon; Vivian’s ready to hammer all over this land.

Funny, clever, and sweetly romantic, this book, like the best YA, will appeal to readers young and old. Unlike much YA fiction, “Vivian Apple at the End of the World” is, shockingly, not a trilogy. It is, however, a duology, and the second book will be coming out in late 2015. (By Kelly Roark)