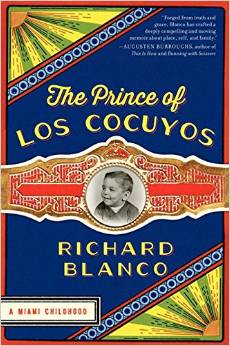 “Made in Cuba, assembled in Spain, imported to the USA” is how Richard Blanco describes himself in addition to being the fifth inaugural poet of the United States, and therefore, “the youngest, first Latino, first immigrant, and first gay writer to hold the honor.” After delivering three prizewinning poetry collections, he is now the author of the funny, humble and moving memoir, “The Prince of Los Cocuyos: A Miami Childhood.”

Told through seven chapters, each focusing on a specific memory—a strategy that allows one to navigate very briskly through time—“The Prince of Los Cocuyos” is sheer delight. The setting is Westchester, a Miami suburb, during the 1970s and 1980s, and the Blanco household is a vibrant one, filled with rambunctious personalities: a father, an older brother and a grandfather; a brutally thrifty and domineering Abuela (a bookie for Cuban mafiosos) who is often at odds with a kinder, but no less fierce, version of herself—the author’s mother. These two women run the household, frequently sparring over housework, money and childrearing. Our little Riqui, in particular, is cause for concern. Abuela is determined to make “un hombre” out of him by driving his artistic spontaneity underground. She disapproves of his taste for architecture, confiscates art and coloring books, shames his affection for animals and keeps a constant watch for any signs of his burgeoning queerness: “(…) it’s better to be it but not act like it, than to not be it and yet act like it. By being it she meant being gay—un maricón.” Abuela means well, of course. Years of a hardscrabble existence as a Cuban exile have thickened her love but nevertheless, she causes great harm to her grandson’s psyche. Through the years, this relationship moves in and out of love and hate but there’s no denying that they need each other.

During trips to the Winn-Dixie, which Abuela long avoided due to her fear of Americans, Riqui serves as her guide and translator while on a chase for discounted whole fryers and, eventually, Easy Cheese. These shopping scenes provide an image that reverberates throughout the memoir, eventually framing two central questions: how does one negotiate an identity when feeling the lure of American culture and the yearning to hold on to Cuba? How can one hold on to Cuba if one wasn’t born there?

Naturally, Riqui’s homosexuality only intensifies his othering. The last two chapters bring “The Prince of Los Cocuyos” to a bitter yet hopeful and extremely touching ending. As a teenager, Riqui is spared a potentially disastrous affair with another, much older, gay Cuban who loves him enough to respect his youth and let him go, for it is clear that the boy is not ready to explore sex, no matter how much he wants it. During a pig roast on a beach, Riqui listens to conversations between Ariel (a boy his age, but a Mariel boatlift survivor) and the other attendees. This very painful scene reinforces Riqui’s position on the periphery. Ariel’s stories stir memories in the adults’ minds. Ariel momentarily serves as a portal to Palmira and Hormiguero for the adults: despite vast age differences, they know the same people and the same places left behind. The adults inquire feverishly, asking who is still alive and which houses still stand. And just like this, for a magical moment, everyone is in Cuba—all but Riqui.

Richard Blanco said that being selected as inaugural poet “was to finally be given a place at the American table, so to speak—to realize that I was finally home—had been home all along.” Home, certainly a hard-earned place for Blanco and generations of Cubans, is where we want him to be. (J-L Deher-Lesaint)

Stay inside with Newcity – you can subscribe for monthly deliveryhere.
+