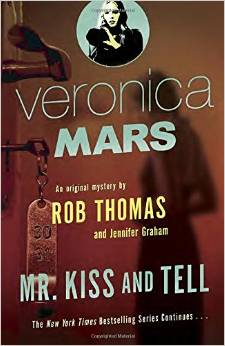 Veronica Mars fans (also known as “Marshmallows”) have yet another book to assuage their separation anxiety following the television show’s tragic cancellation. The book is full of favorite characters and plenty of LoVe (shorthand for Logan and Veronica). Co-written by Rob Thomas with Jennifer Graham, they perfectly capture the tone of the spunky neo-noir detective series.

In “Mr. Kiss and Tell,” a girl is found half-dead, beaten and raped. The hotel where the girl was last seen hires the Mars detective agency to help prove their (lack of) liability. The victim is none other than Grace Manning, little sister of Meg, who in one of the series’ perhaps more soap-opera-like storylines, died, after being in a coma, pregnant, with Veronica Mars’ ex-boyfriend’s baby.Despite clear evidence of severe physical trauma, many doubt her accusations of rape. In light of our national conversation on violence against women, particularly following that infamous Rolling Stone article, this little paperback, a spinoff of a lowly CW television show, strikes a chord. Grace is a good example of a “bad victim.” And, as Roxane Gay recently wrote in her brilliant essay, Bad Victims, “Most anyone who has survived sexual assault is a bad victim in one way or another. There is no script we follow. There are inconsistencies in our stories and our choices. At first we simply try to survive and, when we are lucky, we try to live as best we can.” The Veronica Mars universe has always been a champion of survivors: Veronica is one herself. Even though she was hired to prove that Grace was lying, what really motivates her is finding the truth. Veronica, of course, sees herself reflected in Grace: “She saw the face of a girl who’d been taken apart with violence, and who’d then put herself back together again with sheer willpower. She saw a girl who refused to let the story, told and retold, hurt her all over again.” (Kelly Roark)