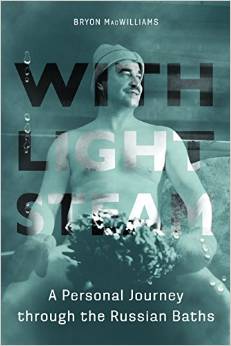 “With Light Steam: A Personal Journey through the Russian Baths, ” by Bryon MacWilliams, captures the fractured identity of contemporary Russia with high fidelity in a way that is at once tender and clear-eyed. This book is introspective American travel writing at its best. A genre-defying mosaic of memoir, historical research and a reflection on time and place, “With Light Steam” is easily in a league with “Travels in Siberia,” by Ian Frazier for spectacular American travel writing on Russia.

MacWilliams takes the reader on an insightful, but never belabored tour of the history of Russian baths, which play a major role in the nation’s history if for no other reason than that many major events of Russian history occurred in these steamy rooms (e.g. in an act that initiated the early Russian state as an independent power, its matriarch, Princess Olga, burned to death an entire delegation of Drevlians—a rival tribe—in a banya to revenge her husband’s death).

Through MacWilliams’ eyes, the reader also experiences a number of thoughtful impressions about contemporary Russia. On his last few travels before leaving for the States, MacWilliams sets out in search of a “black banya”—the most traditional steam room that is chimney-less and coated black from the soot of the heating oven. His quest reveals a land of economic and cultural transition. Even this Russian cultural mainstay has undergone a radical transformation from its pagan slavic roots. In Magnitogorsk, the traditional village bathhouses have transformed into spa-like “trophy banyas” built into mansions by the newly rich. On the northern island Solovki, once famous for its banyas (and being a former Gulag), the only banya to escape dilapidation is a chimneyed “white banya” run by monks as a luxurious spa. MacWilliams only succeeds in finding a black banya in Chuvashia, an impoverished non-Russian ethnic-minority state.

While the banya has Russian roots, there are many in the States which are well worth a visit—especially in the middle of winter. Acknowledging that many Americans may have hang-ups about crowding into steam-filled rooms where naked bathers beat each other with birch branches, in an interview with Newcity, MacWilliams advised not to worry. “The most important thing is to relax!” he says, “no matter what, you feel better when you leave the banya than when you came in. …try not to have expectations and just let yourself be in the moment. Which is I guess good advice for almost all the time.”

And while the banya might not be an architecturally beautiful, pristine place as many Americans would envision a spa, it is a beautiful space in its own way. MacWilliams said, “especially in a country that has such body complexes… no one is going to care once you’re there how fat or thin or imperfect you are. It’s almost a guarantee you’ll see some middle-aged guy with a giant, enormous stomach, and there’ll be someone more unfit than you are. And even if there’s not, no one cares… it’s a real freeing place… You can just be yourself and just forget about whatever hangups or complexes you had when you came in. It’s just—it’s a real gift.”

Though he has never been, MacWilliams said he has heard that there is a nascent banya scene in Chicago, with Red Square, the recently reinvented stalwart on 1914 West Division Street (formerly Division Street Russian and Turkish Baths—advertising itself as Chicago’s oldest banya, founded in 1906), and a relative newcomer, Chicago Sweatlodge (3500 North Cicero Avenue), standing out as notable locations. (Paul Connell)