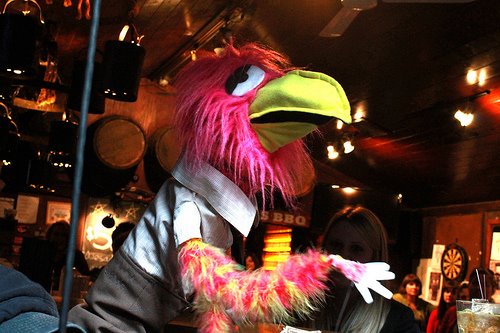 Think vaudeville meets The Daily Show. Think The Nation meets Mad magazine. Think jazz concert on the floor of the Senate. Think funny. Really funny. Then, think serious. Think all those things and what you have is The Paper Machete—Chicago’s weekly, live magazine.

Held every Saturday afternoon at the Green Mill, the show is the brainchild of host Christopher Piatt and this January they had their fifth anniversary. As a weekly, that means they’ve done about 250 unique shows featuring comedians, musicians, performance artists, playwrights, sketch comics, live lit performers, puppeteers and anything else you can think of (Piatt’s minister from Kansas recently gave a homily).

Each performer brings skills from their particular field but is required to do a piece that addresses current events. This leads to some interesting juxtapositions: like a rhymed and metered poem comparing “Sex and the City” to “Girls” and a piano ballad entitled “Baby, Please Don’t Vaccinate Your Baby.”

A labor of love, the show started at dive bar Ricochet’s in Chicago’s Lincoln Square neighborhood. Performing to a small crowd of friends, Piatt and guests could be experimental without worrying too much if one of the acts fell flat.

A willingness to let things happen and see what manifests still lingers and is part of the kinetic energy that accompanies each performance. This may be due to the fact the schedule can change dramatically from one day to the next as performers agree to go on or drop out. But that doesn’t worry Piatt.

“There’s something sort of reckless about it and it brings out really dynamic and exciting ideas. I’ve learned that the deadline is what makes things happen and sometimes, the closer the deadline the more exciting the results,” he says.

Alongside some big names and Chicago favorites—like SNL cast member Paul Brittain, Tony Award-winner Rondi Reed and Samantha Irby of Bitches Gotta Eat fame—the show features a couple regulars, including Chad the Bird, everyone’s favorite pink, fuzzy fowl with his weekly op-ed installment containing strong opinions, a dry wit and the faint undertone of paternal scolding. The creation of puppeteer and actor Josh Zagoren, Chad the Bird has something of a cult following.

Another show-stealer is house musician Bill Larkin. During the anniversary show when Larkin started playing a feel-good song about motivation, the crowd quieted. There was a bit of unease. It all seemed a little too somber. Until Larkin abruptly stopped playing mid-phrase and said “That’s all I’ve got so far.” The crowd died.

Piatt is clearly having a great time as the resident “editor-in-chief, go-go boy, cabaret cabbie, show business shaman, uppity Uptowner, Saturday soothsayer and master of ceremonies.” He recognizes that the show is a stop in a busy weekend for many of the professional performers (hence the 3pm time slot), but also that on this stage these same performers have a kind of freedom that makes space for some smart, fun and unexpected art. “It’s sort of like a community owned co-op,” he says.

The Paper Machete is one of those shows that will appear in a PBS documentary in ten years. Be able to tell your kids, “I was there.” Go. (Paula Carter)