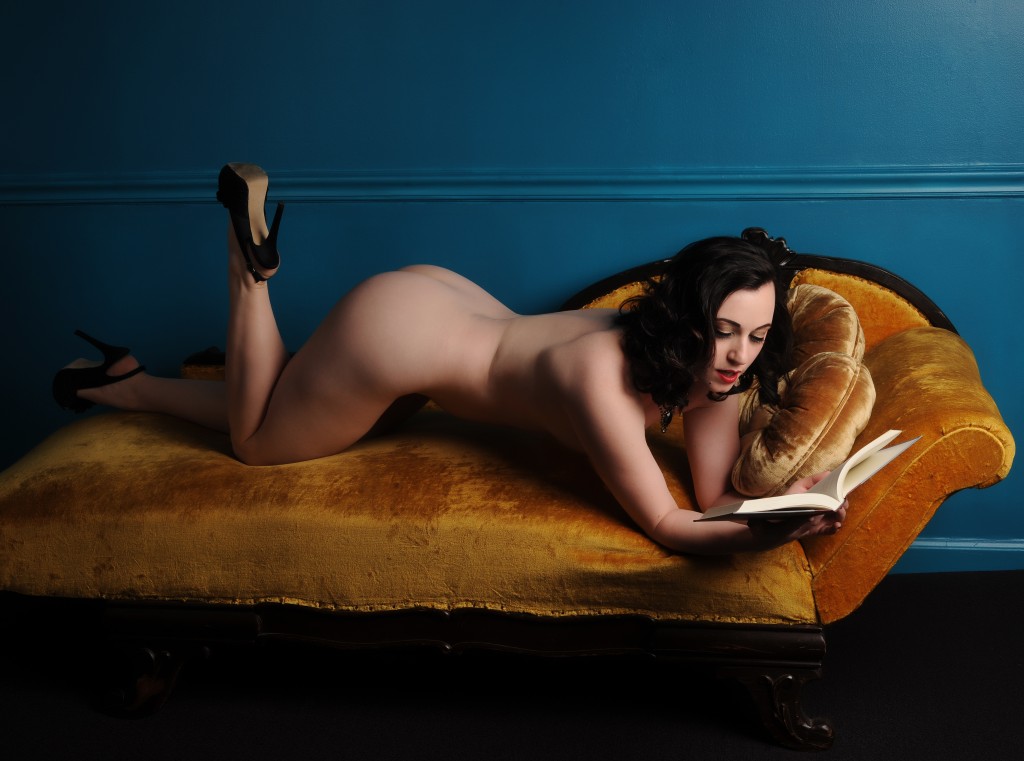 Like so many good things, the Naked Girls Reading series materialized from a happy accident. When international showgirl Michelle L’amour’s husband Franky Vivid happened upon her reading in the buff one eve, inspiration set in. The two of them first thought of nakedgirlsreading.com as a funny, novel idea. But after a test run with a couple of willing burlesque troupe members, Naked Girls Reading took form and took off. The show just celebrated its sixth year and now has chapters in twenty-five cities across the world, with three more in the works, one of which is slated to open in Berlin.

The show is exactly as it sounds: a live literary event where unclothed women read. Michelle L’amour and The Chicago Starlets–Honey Halfpint, Greta Layne, Lady Ginger, and Sophia Hart–enter the candlelit room in silky dressing gowns and before they sit down to lounge on a Victorian sofa or plush chair to read, they disrobe completely. They’re adorned only by extended eyelashes, a distinguishing something or other–ruby earrings, horn-rimmed glasses, purple velvet pumps–and gorgeous cravats provided by Sammy the Tramp, a local Vaudevillian performer and Mash Up Tie merchandiser.

My friend Mare and I attended the “Girls Gone Oscar Wilde” show recently. All of the pieces were by or about the Irish writer and ran the gambit. When Greta Layne read the letter Wilde wrote from jail to his lover, Lord Alfred Douglas, tears streaked her cheeks and the audience reflected the mood. Later in the evening, Lady Ginger and Michelle L’amour countered the seriousness with some levity, rendering a charming and whimsical bit of dialogue from “The Importance of Being Earnest,” tickling everyone’s funny bone.

Members of the audience regularly approach L’amour and the Starlets after shows to talk books. Some want more details about what was read so they can go home and read it themselves. Others confess they had forgotten how great a piece of literature was and tell how they plan to revisit it. Whether the show plays with our Victorian sensibilities or capitalizes on them wholesale, L’amour says “it gets people excited about reading!” Though, obviously, that’s not the only thing people find exciting about the show. (Amy Danzer)