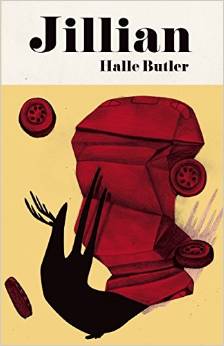 Halle Butler’s debut novel “Jillian” is the story of two ordinary, unhappy women stuck in lives they did not anticipate.

Megan is a twenty-four-year-old working in a gastroenterology office in a well-off neighborhood in Chicago. Her coworker, Jillian, is a thirty-five-year-old woman who commutes in from the suburbs where she lives with her young son. All of Megan’s self-loathing and hatred gets siphoned toward Jillian, a woman she can’t stop talking about. Which isn’t to say Jillian doesn’t deserve criticism. She’s a disaster—driving on an expired license, adopting a dog she can’t afford, and developing an embarrassingly mild addiction to low-grade pain relievers. But she is certainly no worse than Megan who furiously resents her office job and the successes of her friends. So while on the surface Jillian seems like the polar opposite of Megan (after all she’s sickeningly upbeat and has goals, something Megan noticeably lacks), as the book progresses you realize that the women are alike in their unhappiness; they just handle it in different ways.

I finished this book in one sitting and then passed it on to my roommate who did the same. It’s a quick read, which is part of why “Jillian” works. It’s occasionally so cringe inducing that without Butler’s humor and sharp dialogue the book could have become difficult to endure. After all, Butler never once gives her characters a reprieve from the awkward and hopeless events of their lives.

Butler wrote the first draft of this book when she was the same age as Megan. Like Megan she had also been working in a gastroenterologist’s office but the two aren’t as similar as they might initially appear. Megan is frozen in her life whereas Butler was and remains someone who does things. A self-described brat in high school, Butler tells me about the time during freshman year when, in lieu of reading the assigned book about AIDS that strategically managed to sidestep any discussion of sex or drugs (i.e. a young girl contracts the virus as the result of a blood transfusion) she read Tennessee Williams—his collection, “27 Wagons Full of Cotton And Other One-Act Plays,” being a significant improvement over the “pre-chewed bullshit” offered in her class. I think this anecdote accurately sums up the Butler I shared a few beers with on Oscars night. She does what she wants, which, in the case of “Jillian” is occasionally deciding to write—and then writing—a novel in the few months before she turned twenty-five.

“Jillian” is a sour, funny and, at times, beautiful book. But, in the end, I think it is its honesty that made me unable to put it down and that, even now, months after finishing it, has me recommending it in almost every conversation I have. (Kim Steele)